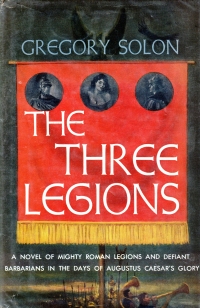 Shortly after reading Last Seen in Massilia, I rediscovered this book on my to read shelves. So I thought I’d take on a thicker tome.

Well, if you’re classically educated and over forty, you might well know how the book turns out from its title. For those of you too young or too public school to know, the three legions were Roman legions defeated by an alliance of German tribes in the Battle of Teutoburg Forest in 9 AD. The Romans never recovered the German territory lost.

At any rate, this book covers a couple of weeks leading up to the battle. The Proconsul is vain and overconfident. The commander of the Eagle legion is smitten with a woman captured in the raid of a small German outpost who craves to be taken care of in a Roman way. Another lesser leader craves the first commander’s position. A brutal but effective legionaire flouts the rules and rules by fear. The legions’ historian is eager to write a scholarly treatise about the downfall of the legions even though he does not believe it to be true. Then the proconsul demands the German woman and an Achilles/Agamemnon storyline breaks out as the commander is stripped of his position and his self-definition. The lesser leader takes command and leads his men into disaster, and then the army decamps into a disastrous ambush in Teutoburg Forest.

The book is deep and well-written with a lot of characterization and a lot of detail about life in the Roman legion. It was not as expository as Last Seen In Massilia, either, and the book delved into the politics of not only the Romans but also the Germans who were unsure about uniting under a leader to attack the Romans when the Romans were not actively at war with the tribes.

I liked the book a lot, and I was sad to discover that the author appears to only have written this two novels. The second is a contemporary (to its time, which is 1958) book entitled Let Us Find Heroes; I will keep an eye out for it.