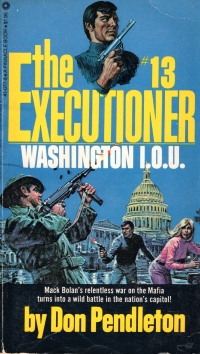 I previously read this book in May, 2011. I didn’t have much to say about it then other than it was a stock men’s adventure novel with shooting and explosions.

In it, Bolan goes to Washington and uncovers a Mafia-run blackmail ring designed to lure in important officials, elected and unelected, into a videotaped tryst and then controlling those men to the mob’s gain. Bolan rescues an attractive widow who had second thoughts about her role in the scheme and was targeted for a hit because her change-of-heart came with a plan to bust up the operation. A Bolan imposter shows to kill the blackmailees and set Bolan up for a frenzied law enforcement manhunt, but Bolan eludes capture and tracks the operation to its lair and rescues the girl, implicates a congressman, and discovers that the hidden figure behind the scheme was the “widow’s” husband.

So it’s one of the Pendleton books of the series, which puts it a cut above a lot of men’s adventure books. Additionally, as I think about it, the men’s adventure series (and comic books) paved the way for the arc of modern television storytelling. These are episodic, but with continuing plot lines that build and crest over the course of a number of books.

So while I ding modern hardback fiction for being informed by television, I have to do the opposite for men’s adventure books. They set the pace, and they’re cheap little paperback designed for quick consumption and discard. Is that a double standard on my part? I don’t think so, but I’ll have to think it over further.

So this book is worth a read if you’re into this sort of thing. You can definitely do worse with the genre.