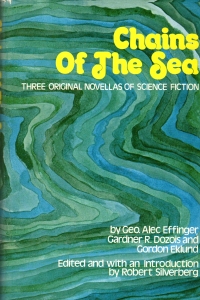 It’s an interesting bit, an enjoyable little read from the era–the middle 1960s through, what, the 1980s? where the future is dystopian and overcrowded and the plots are novel and clever.

The book collects three stories, only the third of which I would call novel or clever. The other two are run-of-the-mill apocalyptic bits that put Man in his place.

In an essay in the Atlantic, Noah Berlatsky ponders
When Science Fiction Stopped Caring About the Future

Most people think of science-fiction as being about the future; it’s a genre that explores possibilities, from Dr. Frankenstein’s invention of artificial life to Ursula K. Le Guin’s world populated by humans who have all evolved into single-gendered hermaphrodites. What might happen if? What could happen when? Sci-fi thinks about new technologies, new societies, and new ways of being, good or bad.

And then science-fiction fans turn to the new Star Wars trailer, and find, not the future, but a reshuffling of 30-year-old detritus.

Read enough of the C-List science fiction from the past, and you’ll learn that the best of science fiction sticks with you but most of it, especially the pedestrian stuff, falls away from you mostly unremembered. A lot of the old stuff retreads common tropes just as much as new stuff does; we just forget it if we even bother to read or to have read it.