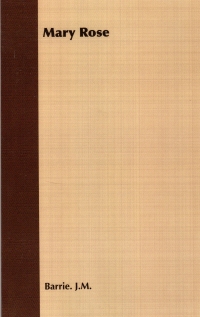 I am so easily led. I see an article ("War, Culture, and the Minds of Nations") allude to a book (actual quote: "There were other responses that we have largely forgotten. England saw a revival of the spiritualism that had emerged in late-Victorian days among post-Christian intellectuals. James M. Barrie had a huge West End success with his syrupy mystical play Mary Rose, in which a bride disappears on her honeymoon on a Scottish isle only to reappear there completely unchanged 30 years later. It was said that when the line “Mary Rose is coming across the fields” was spoken, a gasp went through the audience. But a London theater audience in the 1920s was likely to contain several hundred people whose sons, nephews, and older brothers had perished on the Western Front. However absurdly, they were hoping that death could somehow be denied."), and suddenly I must read that.

So I bought this book and read it immediately.

The play, as one would expect from the author of Peter Pan, is fantastic in nature and also deals with, as Mr. O’Sullivan indicates, a character who is strangely young. The play has three acts: there’s a frame story about an old man coming to a haunted house for sale. He wants to see a ghost. Then we go to a flashback in the house, where a man, his wife, and the parson interact and talk about art. Then the man and his wife entertain the suitor of their daughter Mary Rose and reveal to him a curious incident from her youth, where she played on an island in Scotland while her father fished in a boat nearby, and she somehow disappeared for a number of days. When they found her, no time had passed. In the next act, the now-husband takes Mary Rose back to the island, and as they prepare to leave, she vanishes. Then another flashback takes place thirty years into the future; Mary Rose’s parents and the parson are again talking about art, and again Mary Rose’s husband arrives. Mary Rose has been missing the whole time, but news comes that Mary Rose has returned and is on her way (she’s coming across the fields). Mary Rose arrives, and she’s stunned to see how everyone has aged, and she’s eager to see her son who was a baby when she disappeared, but who has run away and made his life in Australia. Finally, we return to the present day, where the old man is Mary Rose’s son, and he meets the ghost of his mother. Mary Rose, now a ghost, has forgotten what she’s looking for, but it’s him, and he has difficulty in convincing her it’s the case, but ultimately, he puts her spirit at ease.

The plot is very symmetrical and engaging, but I think there’s a lot of the story that lies in between the frame stories that would be interesting. What happened to Mary Rose after she returned? She never went back to the island? Did she die young after not finding her child?

The day after finishing it, I’m still thinking about it, so that’s probably the mark of a good bit of theatre. And like so many of the non-modern plays I read, I’d like to see this on stage. But that is unlikely.