So I was reading this story about how film colors are going ka-bluey in modern films compared to Technicolor films, and the image at the top made me pause: 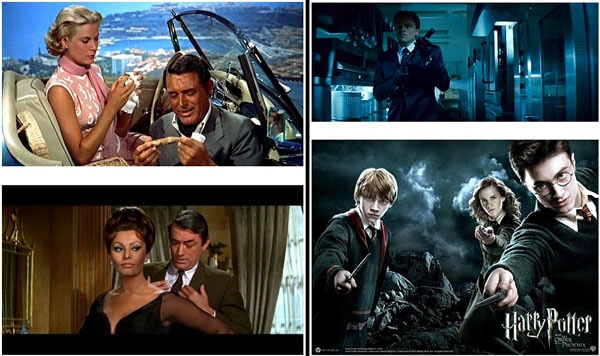 All right, the top image is Cary Grant and Grace Kelly, so it’s To Catch A Thief. But the bottom one…. That’s Sophia Loren and Gregory Peck. What is that?

Turns out, it’s a 1966 film called Arabesque. The trailer:

One: The film deals with an Arab prime minister, but Sophia Loren’s character works Persian magic? How much more sophisticated those of us who are paying attention are fifty years later to know that Arabs and Persians are different, as the world might find out if the Israelis don’t “fix” the Persian nuclear problem and the Arabs rankle under that. Not all Mohammedans are the same.

Two, does anyone else think that the villain looks like Bono?

The story: Peck is an American professor of antiquities in London contacted by an evil Arab businessman, Bono, who wants him to decipher an inscription. Loren plays a beautiful woman who is caught between the businessman, a violent resistance movement in her native land, and the prime minister who is in danger. Peck endures a number of double crosses and overlapping lies until he discovers the truth which is….

Well, let’s not overthink the MacGuffin here. A day later, I realize it makes no sense. But the story is a 60s-paced suspense thriller. The cinematographers play with perceptions a little using mirrors, fish tanks, and special effects to emulate the experience of being drugged. So they had fun with it.

The film is also punctuated quite appropriately with lights falling on Sophia Loren’s eyes and face quite a bit. Also, between the foot massages (pronounced with the original French emphasis) and shoe gifts/shoe trying on sessions, I suspect this film might be the source of 37.98% of all foot fetishes in Baby Boomers.

It’s a good film of the genre, and I watched it in spite of Peck, whom I don’t rather like as a presence (based mostly on his work in The Keys of the Kingdom, Gentleman’s Agreement, and The Man in the Gray Flannel Suit). I’ve always found his topic matter a bit too audience-enlightening, but this turn isn’t so message-oriented. Also, during the course of the film, I had a personal revelation: I tend to like Cary Grant and Gary Cooper more than Peck and want to emulate them, but maybe Peck rankles me because I’m more like him than them. Woe is me.