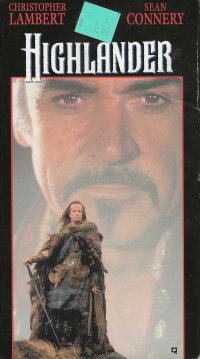 Before watching the Christmas movies (Die Hard, Die Hard 2, Invasion USA, and Lethal Weapon), I invited my boys to watch this film with me. I’d found it in the videocassette player, and asked them if they’d watched it already–but they had not. So I watched it, alone, as they’re too sophisticated for 80s B actioners now that they’re in their teens in the 21st century.

I actually watched the Highlander movies, including Highlander II: The Quickening, Highlander III: The Final Dimension (alternatively titled Highlander III: The Sorcerer with Mario van Peebles) and Highlander: Endgame which tied the movie to the television series, a couple years ago (a couple years being maybe two, five, or eight–as I was not writing movie reports at the time on this blog, I have no way to know). But I picked up fresher videocassette copies last July, so having new copies (well, new old copies) on the to-watch shelf means I have to watch them again.

Okay, you probably know the premise if you’re of a certain age: A Scotsman joins his clan in battle, but nobody fights him–a strange figure has said that he wants the Highlander for himself. But circumstances, and the need to make a full movie of it, means the dark figure does not best the Scotsman, who is seemingly killed. When he miraculously returns to life, he is run out of town as being the devil. Sean Connery appears to tell him he is an immortal of a special sort, and to explain the rules of The Game: He can only die if his head is lopped off, and the immortal who cuts off the head of another get his power or some such. When they come to a final reckoning in a strange land, one will emerge with the power to rule humanity.

So, yeah, you know, it doesn’t go a lot into the cosmology, which is probably for the best–the second film (The Quickening) kind of tries to retcon some weird, almost Scientological backstory on it, but other cuts of the film eliminate that in favor of just letting it ride. But that’s to come in the future.

The film was a disappointment at the box office, and it’s pretty clear why: It has more of a direct-to-video feel and look to it, but it’s since become a cult classic and clearly has spawned several other movies, television series, and books (including Highlander: Element of Fire, which I read eighteen years ago–equidistant in time between this movie and now).

But someone has been listening, whether it’s my boy’s phone or whatnot, but Facebook knows I’ve watched the film. 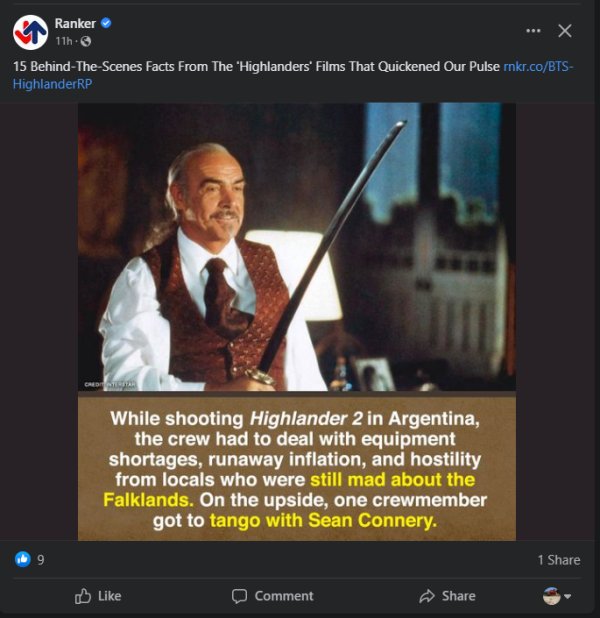 I’ve also gotten posts explaining that Christopher Lambert is very nearsighted and did not wear his glasses for filming, so the stunts and sword-fighting he did were that much more dangerous. So, yeah, someone knew I watched this film before you did, gentle reader. Perhaps they knew it before I did (which might have been asking if they’d already watched it since it was in the videocassette player). You think I’m mad? I WILL SHOW YOU MADNESS.

At any rate, although it has become a cult film, Highlander has not spawned any Brenda versus Heather Internet arguments.

Roxanne Hart plays Brenda, the 80s love interest, a metallurgist consulting with the police, and Beatie Edney plays Heather, Macleod’s wife in the past whom he loves but has to watch age and die. You can probably guess which side of the debate I fall on before searching the Internet and seeing Roxanne Hart with the cropped curled perm that was professional woman’s signifier in the 1980s.

So you can guess how I feel about the film given that I have watched it twice in a shorter time span here recently than probably any other film that’s not a holiday film. So you can probably expect to see film reports on the others that I bought in 2019. And look at that picture of videos I bought on that trip to Branson. I’ve almost watched them all already, which is pretty remarkable as they’re not the ones I’ve bought since that are arrayed atop my to-watch shelves and get previewed first when I have time to watch a movie. Interesting. Not as intentional as my declaring and succeeding at a goal of reading all the books I bought at Calvin’s Books that year. It’s probably more reflective of the fact that I like those movies, whereas videos I have bought more recently reflect films I might want to watch someday and I’d better pick them up now while I can buy them cheaply at antique malls.