Katie Berry of Housewife How-Tos posted this meme on Facebook: 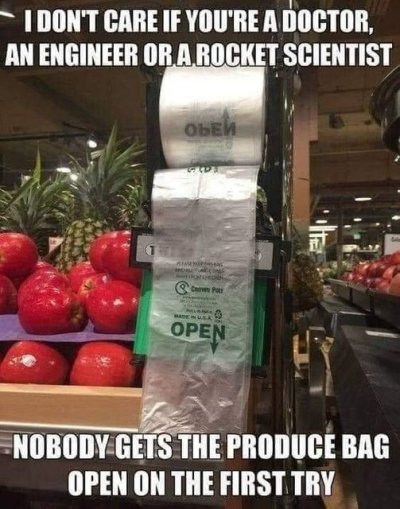 Which may be true, but one profession is not represented on the meme: Produce clerk.

I frustrate my beautiful wife because I can always open produce bags on the first try because I have lots of experience.

As I have probably mentioned, working as a produce clerk in college is also where I learned to juggle using the bruised fruits, from apples to cantaloupes, that we’d culled from the shelf and were planning to sell in marked down packages. I’ve noticed that produce departments don’t tend to have the little cello-wrapped trays with marked down produce any more. Perhaps I’m shopping in higher-end stores than I worked in. Come to think of it, that is likely the case.