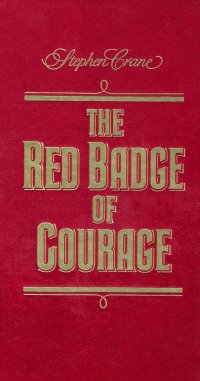 I am going to go out on a limb here and say that the text comes from the 1895 publication of this book; in 1982, Norton came out with a longer version based on Crane’s “original manuscript,” and I doubt they would have shared that copyright with Reader’s Digest the same year (the Reader’s Digest The World’s Best Readers edition came out in 1982, and mine is a second printing from 1983). Not that it matters except for purists. But I am throwing it out there because I read the Wikipedia article.

At any rate, this was my first reading of this book. I understand, or at least my beautiful wife told me, that some people read this book in elementary school, or perhaps their mothers’ wombs, but I came to it late, and I am pretty sure that I have mentioned once or twice that I confused this book with Where The Red Fern Grows because they both have the word Red in the title. So, alright: Even though I came from an era where they read novels in school, the schools I attended did not read either of the red books. Nor The Little Red Book, which they might teach in TikTok form to modern students, but that’s neither here nor there. Also, that might remind me of a story, although I don’t need much reminding as it’s recent, but perhaps I will tell it someday.

Where was I? Oh, yes. This is a Civil War book about a young man who goes to the war over the objections of his mother, who does a bunch of marching and bivouacking and thinking, and when he encounters battle for the first time, he gets caught up in a disorderly retreat, and he runs away. He spends a couple of days out of the fray, running then meeting up with a rearward march of the wounded, and he gets a bang on the head which he presents as his war wound to have taken him out of battle. Then, he returns to his unit, and they have a battle, and then they’re ordered to a charge he knows is a distraction which is expected to lead to many casualties, he performs well, and he does not die.

I had a bit of trouble with this book because I’m from the 21st century (well, I am from the 20th century, but I’ve been here in the 21st a long time now). As I read it, I kind of expected that the main character would die and/or the book would veer into anti-war or anti-patriotism, but it doesn’t take a more modern turn. Instead, it tries to re-create what it was like in the Civil War even though it was written twenty years later by a man born after the war.

The prose is a bit purple. And red. And yellow. You don’t go more than a few sentences in dry spots where a color is not mentioned, and the prose is measured for its own sake, not the service of the plot. So it was a bit denser of a read than a thriller or genre book, but not as dense as Georgian prose or self-indulgent high literature.

So not one of my favorite books, but I’m glad to have read it as it offers some light classical literature amid this year’s children books and Star Trek short storification collections.