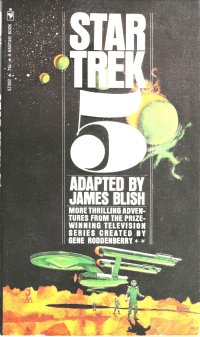 I already reported on this book in 2005, which probably makes it one of the earliest book reports on the blog. Well, certainly early in the almost 1,800 on the blog. I basically said then what I’ve said in a lot of the more recent reports on the Star Trek books: They’re short story recreations of episodes from the original Star Trek series by a British science fiction author who had not seen the show–so it lead to some early blunders like calling Vulcans Vulcanians and whatnot. The books came out in the years when the show was off the air (which was before VCRs, so book form was the only way to catch it if you weren’t sitting in front of the television when the syndicated repeats aired). I also mentioned, as I always do, that I originally read these books in the middle 1980s, so the books were fairly new and although the motion pictures had begun, Star Trek: The Next Generation had not.

So, as I mentioned previously, Blish is not working in airdate order or stardate order–he’s basically writing up the episodes that fans say they want to see next.

One thing that’s becoming clearer is how much the stories kind of mirror each other. We have four stories in this book where someone tries to hijack the Enterprise. We’ve got two stories with dopplegangers of one sort or another. Other books have had the time travel stories that kind of mirror one another.

Which is probably why when I watch or read about The Twilight Zone, I’m inspired to write speculative fiction, but I don’t get that same impulse from Star Trek.

Still, a bit of enjoyable nostalgia. And perhaps I should space these books out a little more, but they’re so quick to read, and I’m only at 19 books this year, so I need to pad the accounts.