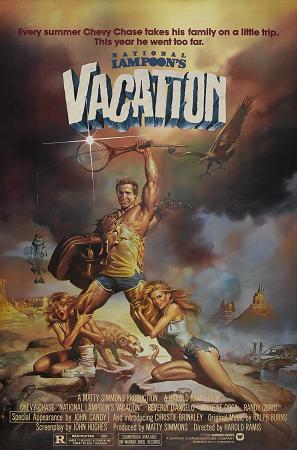 As you know, gentle reader, I think this is the best film adaptation of The Grapes of Wrath.

That gag aside, it’s actually from a short story written by John Hughes for National Lampoon. Given that it has spawned, what, five or six sequels, a set of commercials, and a television series currently in development, I have to say it’s a heck of a short story. The humor aligns kind of nicely with A Christmas Story, which was written by Jean Shepherd, also a print humorist. It’s not as zany as modern comedies, and it relies on adults dealing with adult things, not adults dealing with childish things.

At any rate, you know the plot: Clark Griswold decides to take his family to the Walley World theme park and wants to drive them out cross-country. Instead of his expected new car, he gets a hooped up station wagon. He piles his wife and two kids into the car, and they travel the country, having misadventures on the way to California. When they get to Walley World, it’s closed, whereupon John Candy delivers the only line I really quote from the film: “Sorry, folks. Park’s closed. The moose out front should have told you.”

It holds up well, I suppose at least if you’re of a certain age not maladjusted to contemporary R-rated comedies. My boys liked it all right, but I’m hopefully helping their cinematic tastes and predilections by showing them old films like this. The oldest added “Holiday Road” by Lindsey Buckingham to his regular playlist, so we hear that often whilst he plays video games.

But the real question from the film: Beverly D’Angelo or Christie Brinkley?

D’Angelo plays Mrs. Griswold, and Christie Brinkley plays the temptation in the red Ferrari. In-plot considerations of marital fidelity aside, I must confess that even now, forty years later, I am unsure whether I am on Team Brinkley or Team D’Angelo.

I think I have to give Christie Brinkley the slight edge here, and perhaps it’s out of respect for Billy Joel’s exceptional taste.