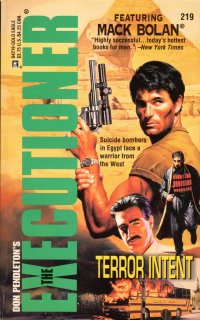 Well, my first book of the year–why not make it one of the less than a handful of Executioner novels I have left? Especially since they’re really now something to be finished rather than really enjoyed by the late 1990s, when they’ve bloated a bit and have kind of lost their roots and what made them most enjoyable at their best–the philosophical musings.

In this book, Bolan is in north Africa when an Egyptian band of Islamic terrorists begins targeting tourists, especially Americans. With funding to buy expensive explosives and the hired know-how of a Palestinian terror expert, the group–The Holy Voice–presents a real threat, although not on the scale of Chinese nationalists attacking nuclear plants or Caribbean dictators trying to buy nukes; but some of these smaller side missions could be satisfying, but in the execution (ahut), not so much.

I mean, you have set pieces, and you have bang-bang, but that’s about it. Perhaps I’m hoping for too much, or perhaps I’m idealizing the early books that I read fourteen years ago (whose publication date was a mere twenty-four years and 204 books prior to this volume). Still.

I flag a couple of things in these books as though I’m going to bother reviewing the little tabs while writing these little reviews. The first thing I flagged, though, again was the “A Brit wrote this” because it talks about height in terms of yards. We Americans tend to measure distance in yards, not height. But I have pointed that out in recent books which turned out to have been written by an American, so never mind.

At any rate, March 1997 is the publication date. I often like to track what I was doing at the time the book came out. That was a big year: A couple weeks before this book came out, a girl at the University of Missouri emailed me where to read poetry in St. Louis. And that worked out all right for me. You know, I printed out every email she sent me during those first few months, and when I admitted that I was emailing a girl to one of my friends, I used the two inch stack of paper to indicate she might be serious, I dunno. I have them all in binders here; I should re-read those instead of an Executioner novel sometime.

Never mind, the Winter 2022 Reading Challenge is on. It will have to wait until spring, as will the next Executioner novel.