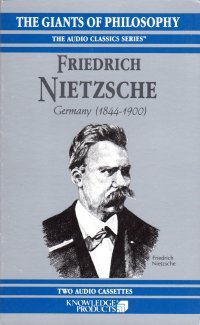 Not long after having Charlton Heston and vocal talent narrate Søren Kierkegaard, I picked up the next chronological set of tapes, those on Neitzsche. You know, I am listening to tapes more than lectures or books on CD because my truck has a CD changer in it, where you can load up six CDs at once. Which sounds good if you’re the only one driving it, but it’s a bit of a hassle to load six CDs at once, and it’s even more of a struggle when your beautiful wife wants to load some of her CDs as well. Oh, the humanity!

They rely a lot on vocal talent ranting Neitzsche’s own words in a harsh German accent, so it was distracting and hard to follow. But Neitzsche’s work is harsh and ranting anyway–I am sure I thought a little better of it when I was young, inclined to Dionysianism and thinking of myself as an ubermensch. But ultimately, the recasting of morals as dependent upon man’s capacities or whatever so that different actions are wrong or right depending upon…. Well, it’s clear that one, or a national socialist party, might take that to heart.

I never really got into Neitzsche as I was innoculated by my earlier exposure to Aaron Rodger’s favorite author Ayn Rand, wherein the superman (John Galt or Howard Roark, take your pick) was reined in by a real, concrete morality probably influenced by Kant and maybe Thomas Aquinas.

Which is kind of depressing, as I have an old Waldenbooks? Barnes and Noble? omnibus edition of Neitzsche around here, and if I am going to eventually read all of the books I own (assuming medical science can keep me alive until 2173), I will have to read it.

But, you know what? Listening to this book and reading the Neitzsche when my brain is in a jar and the “reading” is the injection of a certain chemical into the jar whilst receiving certain bioelectroradiographic pulses is still a good thing, if only to refresh how far one has come in one’s understanding of philosophy over the decades. Also, it was only a couple of hours of drive time, and, man, I love these things. But not the German accents.

(Oh, yeah, the latest link on the Aaron Rodgers maybe pointing at Ayn Rand on a podcast from Instapundit, who is seemingly the only thing that’s not a tabloid that I read.)