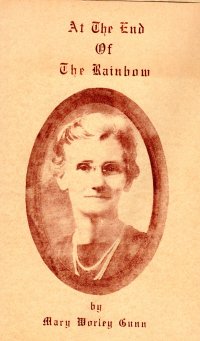 Now this is what you would expect of good grandmother poetry. The book, comb-bound when I was but two years old (but not by my grandmother) runs 94 pages on high-quality cardstock for the most part. It touches on themes of holidays, religion (lightly), family, and patriotism, but not unalloyed with a touch of pain (apparently, she lost a son in World War II). We get the gamut of history in the poems: She married in 1918, in the shadow of World War I, lost a son in World War II, and wonders about kids these days in the 1970s.

The poems are tidy little bits with end rhymes; the introduction says that the author had pieces published in the newspaper; I remember when newspapers published poetry. I will have to admit, of all the papers I take these days, only one drops in a poem from time to time, and of all the magazines I take (which, to be honest, is fewer than the newspapers), only one or two have a poem from time to time. But in the olden days of the last century, gentle reader, you might get your little ditty in the paper, read by people, enjoyed a bit and mostly forgotten. Unlike today, where you pump the poem into a database somewhere to be eventually discarded with a click of a No button instead of a nice form letter, and even if you get it published in a proper place, only other poets will read it.

You know, that’s why I read grandmother poetry and old Ideals magazines. Because I remember when poetry like this was a staple of the people and not The Poets and Power. 1974, maybe 1980, might have been the high mark of this; by the time I was dropping chapbooks in 1994 and 1995, nobody at the coffeeshops was buying.

Compare and contrast: Although you can get a print-on-not-much-demand copy of Coffee House Memories on Amazon, you can actually order a print copy of this book on Amazon. Unrequited and Deep Blue Shadows, my laid-out-and-printed-at-Kinko’s chapbooks, are not available.