The headline/title is full of uncertainty, including the word friend, clearly. 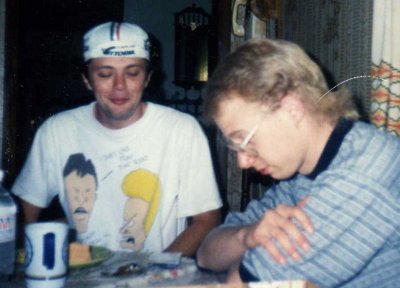 I met Glenn at college in the Philosophic Theology class that I dropped right before semester. We thought we might have met before, and as we both were nominally commuter students–neither of us lived on campus–perhaps we had bumped into each other at a church festival or Summerfest before. But we became friends, and we went to a couple of concerts together–including the infamous trip to the Thirsty Whale in Chicago to see Lillian Axe one Saturday where I had to work early on Sunday. Glenn actually drove me to St. Louis along with Mike after my college graduation in a brown Pontiac Sunbird. It was part of a summer cross-country trip that Glenn finished but the Sunbird did not.

We stayed in touch for several years after graduation–I had stayed a weekend with Glenn in his mom’s house when I called my father to see if I could drop in (our relations having turned frosty after I graduated and returned to St. Louis; perhaps he thought I chose my mother over him) only to learn my father was going in for a biopsy that day, discovering the cancer that would kill him in a year. I also stayed with Glenn other times at his apartment in West Allis–I was going to Milwaukee every month or so for the first, what, year? two years? after graduation.

However, we fell out in the last years of the century. As I mentioned when talking about Mike, who was the best man at the wedding, Mike replaced someone who could not in good conscience be my best man–that was Glenn, and when he told me he couldn’t, I said “Okay,” and hung up the phone, and we did not talk for many years.

But some years later–what, a decade? I got a note from him. He’d moved to the east coast, gotten a Master of Divinity degree, and had gotten married–but that marriage ended, and he moved back to Milwaukee. He developed a debilitating and progressive disorder that left him disabled, and after his mother passed and an engagement broke up, he got really depressed. His Facebook feed filled with “I’m so lonely/depressed” memes.

So I would periodically reach out, see how he was doing, and try to strike up a conversation with him, but his responses were generally depressive and sometimes outright hostile. I sent him little Christmas gifts, and during the pandemic, when he didn’t have an answer to “Whatcha reading, Glenn?” I had ABC Books ship him a couple of books about cats.

But I found myself torn a bit between the Christian imperative to reach out to those in need and the more modern sensibility of eliminating negative people from your life. I mean, I’m not a ball of sunshine myself, as you know.

I hadn’t seen a cat picture from him on Facebook for a while, so I went to his feed directly. He posted on November 4, and then on November 6 and November 8, two people posted on his wall RIP and that he would be missed. I can’t find an obituary, but he has not responded to a message, so I think it is probable that he has passed away. I cannot find an obituary, but who would post it for him, and for whom would it be posted?

I cannot help but wonder if he took his own life.

I cannot help but wonder if I failed him. Should I have been more consistent and persistent in contacting him? I don’t know. Was I trying to connect with him for his sake or for mine? After all, I am turning the rumor of his death as a reason for self-flagellation. I don’t think so, but who can really say? I think I was reaching out to him because I really felt for him, getting older and basically alone, and I could too easily imagine what that is like.

A lot of great stories from that my late college years and shortly thereafter feature Glenn. I think of him fondly.