Yesterday, we stopped at ABC Books for a book signing since we were in the area (well, an hour away in Wheatland, Missouri, for a cross country meet). I was pleased the meet was not delayed so long that I could not make the afternoon book signing. We actually got there, still cold and wet (going on five hours of being cold and wet), right as the signing started, actually, so the authors were talking with some other fans and blocking the way to the martial arts books, so I could not complete my regular circuit.

I wanted to get home, so I did not linger, but I did pick up a couple of things to read by the warm fire. 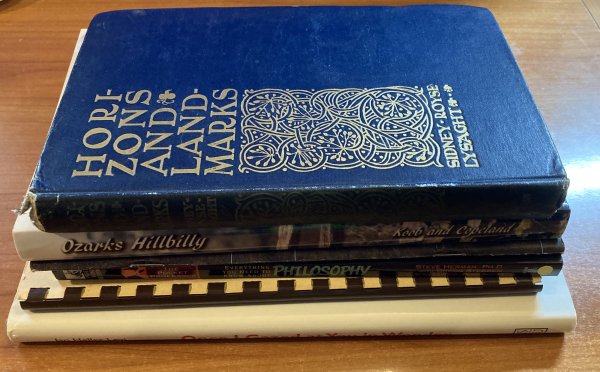 I won’t go into how much I spent since I’m moving out of the cheapest books that Mr. and Mrs. E. have to offer, but they’re not the really nice collectibles that they have that I hope to get with gift cards some day. At the end, though, I would probably be better off just buying the bookstore in toto instead of a little at a time. Perhaps then I would limit myself to taking a book or two at a time when I’m looking for something to read instead of buying five or ten to put on my shelves and then read one or two before I’m back again.