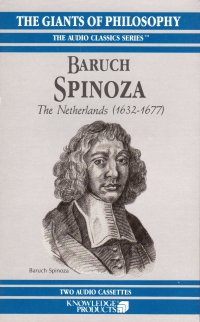 After listening the Charlton Heston narrating St. Augustine, I went right into this, skipping ahead 1200 years (although I did listen to St. Thomas Aquinas earlier, so I did have a medieval interlude).

With Baruch Spinoza, we’re coming into more modern modes of thought. Spinoza embraces a sort of Platonism as well, but unlike St. Augustine, his does not contain a personal God. Instead, God is distant (but present in everything) and rather inscrutible except through deep thought, as God (not a he as that is antromorphic) created everything and continues to create everything every day, but God is not responsive to mankind at all.

So working from that point, Spinoza tries to build a set of ethics with some disappointing results.

The course is about half biography and half deep thought, which is just about right for this lecture series. I had to listen carefully to the bits that explored his theory of substances, modes, and attributes, and I’m pretty sure I would have to read more detail about them before I could talk intelligently about them, but rest assured, they’re Platonism in Dutch.

The course mentions how he influenced the Romantic poets–probably in the God is in Nature lines of thought, and how he was excommunicated from his local synagogue and lived a life in relative poverty and isolation as a result. But interesting.

You know, many of the lecture series I have, I put on the shelf as trophies, but these are brief enough and interesting enough that I might want to listen to them again. So long as I have continued access to a cassette deck.

A Compensated Link, So I Must Tell You: