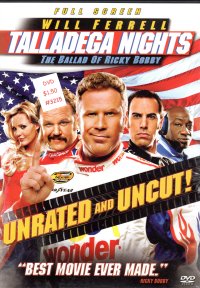 I had seen this film before–hopefully on cable or rental and not on a DVD since I just bought a DVD for a buck or two and don’t need a backup copy. I recently hit an antique mall and bought a number of DVDs for $1.50 or $2.00 each–cheaper than at a Branson thrift store, but maybe not for long once they start drying up or people start dropping streaming services.

At any rate, this film is the story of a racecar driver, Ricky Bobby (Will Ferrell), who wanted to be a driver like his father who abandoned the family. He’s given a chance on a last-ranked team to take over mid-race when the apathetic driver abandons the car and crew. It starts his rise to fame and fortune and marrying a cocktail waitress and their family. Along for the ride is his best friend from boyhood played by John C. Reilly who often comes in second behind Ricky Bobby. When the team hires a French Formula 1 racer, Bobby has an accident that leaves him unable to drive. Which causes his wife to leave him for John C. Reilly. Until he can race again, when he is redeemed. C’mon, man, the plot’s not really the point.

The point is to watch Ferrell, Reilly, and the cast behaving outlandishly and boorishly to comic effect. It’s crass, and it would probably not get made today, but it’s amusing in spots.

You know, I think I have mentioned the Stillerverse–the comedies with Ben Stiller and his normal crew, and the Sandlerverse, with Adam Sandler and his crew. But the Ferrellverse is also a thing, with the films that he makes with John C. Reilly. Of course, the more I revisit these films, the more overlap I find, although none of the Sandler or Stiller crews appear in this movie.

Will I rewatch it? Well, I did this time. And I did not watch it with my boys as I was not sure whether it was too crass for them. But probably not. So one of these days perhaps we’ll watch it together.