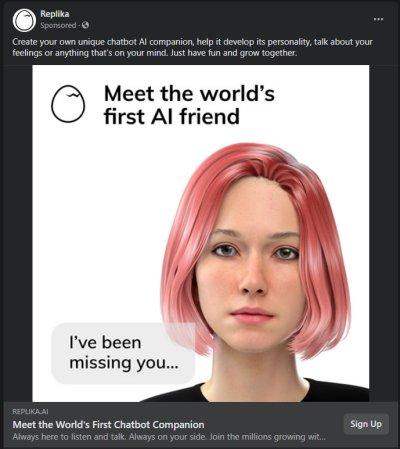 C’mon, man, let’s just call that what it is: an Americanized version of a Japanese dating simulator.

Jeez, I would hate to see a Signal ad that describes how Facebook sees me.

But I came not to dunk or snark on replicants, or at least the replicants our 2021 can produce since all the smart kids for the last twenty-five or thirty years have gone into data collection and manipulation instead of robotics and bio-engineering so that we’ve got a cut-rate Blade Runner future where instead of flying cars and moving billboards that are forty stories tall, we’ve got Facebook feeds and perhaps soon-to-be mandatory electric vehicles that can go dozens of miles on a single charge. I didn’t come to make snarky comments on the misbegotten world of the 21st century, but this is a blog, gentle reader, and I have been a curmudgeon since I was thirteen or fourteen years old.

This would not be my first AI friend, gentle reader. And, no, it was not a Japanese dating simulator. Nor Bradley, the character in my purloined copy of Little Computer People.

The first would have been Eliza. Picture below the fold.

At any rate, nothing new under the sun. And I can’t imagine that talking to your 21st century AI friend would be, erm, private in any sense of the word. But do the kids even care any more?

Oh, and gentle reader, if you’re the kind of person to say that Eliza was not really AI, just vague canned responses that add bits from your input to them but this thing is Real AI, you have been reading the marketing hype. Modern “AI” is just more canned responses, faster, with some different variations programmed in it. I might sometime believe in artificial intelligence, but I would require some convincing. And things written by 21st century developers is just more data amalgamation, faster, with bigger data sets so far.