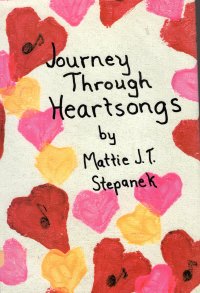 I regret having read this book.

When I bought it this weekend, I thought it was a collection of grandmother poetry based on the name Mattie. Short for Matilda. Oh, but no. Mattie is short for Matthew.

The poems are not very good, but Mattie is, at the time of publication, 13 years old.

And that would be that, but I came across a poem that he wrote when his older brother died. Each of the poems is dated, and when I got to the bottom of the poem, I did the math. He purportedly wrote this poem when he was four years old. Which is when I looked a little deeper and found the cult of Mattie.

I missed this particular cultural phenomenon in the early part of the century, mostly because I did not watch Oprah. A quick glance at the Wikipedia entry fills in some of the background. He suffered from a rare degenerative condition, as had his deceased siblings and as did his mother, and Mattie ‘wrote’ these poems not so much about that but about peace, love, and understanding. As I mentioned, he appeared on Oprah, met Jimmy Carter, and gave speeches about being a peacemaker, although I am not entirely sure what peace he made. A number of books of his poetry were published, and apparently then-sensation Billy Gillman recorded an album inspired by Mattie’s poems. Mattie paced away in 2004, not long after this book appeared, and since then several non-profits have been started in his name and he is on the road to sainthood.

So. I feel kind of bad having read all this and thinking that there’s some child exploitation going on, making an industry, albeit a small one, out of this kid. I’m not knocking the kid himself–I imagine he had the time of his brief life hobnobbing with celebrities and getting accolades–but the poems are not very good.

And, unfortunately, he did not have the time on earth to improve. Although, gentle reader, you might also say this is true of my poetical efforts and the possible lack of enduring quality.