So I took the back-up car to drive the youngest to school yesterday, and I have my audio course lectures in the primary vehicle. So I set the audio system to pick up music from my pocket computer.

Instead of my workout playlist, which I tend to stream from my wrist computer when I’m at the YMCA, it started playing a Keiko Matsui album, a light, jazzy tune as I drove along. Suddenly, I’m having a flashback to driving a car in 1996 or so. But it’s not me driving: It’s Philip Marlowe in a video game called Private Eye.

I bought the game at a little PC shop that started out in High Ridge but ended up in Murphy; I had done my own time in a different PC seller before hand. I was driving a grey sedan at the time and had been wearing a fedora for several years by that point. So when I spotted this game, I hopped on it. I remember playing it in the dining room of my aunt’s house in Lemay, where my mother and I lived for a couple of years.

When Marlowe is driving, the game plays a little jazzy music. And I wanted the same for myself.

Although St. Louis had (and has) a jazz station broadcasting from across the river in Edwardsville–WSIE–reception is a bit spotty towards the southern part of the St. Louis area (such as Lemay and later Old Trees when I lived there). So I thought about picking up a jazz album–on CD, as I was not thinking in terms of records then. So I did a little research, perhaps on AOL (lol), and I decided on a saxophone jazz album: 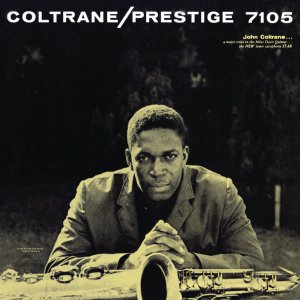 To be honest, my cars at the time did not have a CD player–and I don’t think the grey sedan even had a cassette deck–so I was dependent mostly on the radio for my music listening. So my foray into jazz at that time didn’t go very far. I did end up with a Miles Davis and Ella Fitzgerald CD, though, by the time I moved to Casinoport–where I could receive WSIE on my radio when it was on the top of the bookshelves and the antenna was pointed just so.

Well, that was a long time ago and many jazz albums ago. Although, as you know, gentle reader, my jazz tastes tend to run to pretty women doing jazz these days, so I haven’t listened to the Coltrane album for a long time. I should probably rectify that. At some point, probably around the turn of the century, my beautiful wife gave me a Coltrane box set which I should listen to as well.

1 thought on “How I Got My First Jazz Album”