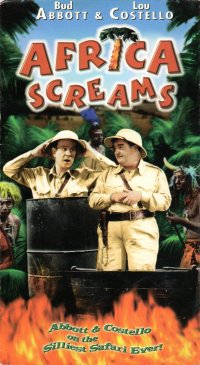 On Sunday evening, my beautiful wife and my oldest son were out of the house for a church youth group event, so the youngest and I had an opportunity to watch a film. So I picked this one because the youngest is a good sport and will watch black and white moviews with his father. Also, Big Brother Alphabet says I should watch some Abbott and Costello.

In the film, “Buzz”–Abbott–and Stanley Livingston–Costello–work in a book store in New York when people come in looking for an out-of-print book with a map of Africa in it. Although they do not have the book, the people offer Costello (come on, I’m not going to call them by their character names because they’re not playing different characters–they’re playing Abbott and Costello) large sums of money to draw the map. Abbott catches on that there’s bigger money involved and inveigles them onto a safari whose purpose is ostensibly to capture wild animals, but in reality seeks diamonds. So it sets up several set pieces with African animals, bad guys, and cannibals.

The film comes from 1949, which means I would have seen it as a kid when it was a relatively fresh 30 years old instead of (shudder) 70 years old. My son watched it silently for a while, but toward the end he found some of the bits amusing and laugh-out-loud funny. So some of it endures. I was amused, too, but I was steeped on Abbott and Costello bits and movies growing up–enough that I prefered them to Laurel and Hardy.

Researching the film led me to some interesting tidbits. First, by the deep-dive research of looking at the credit card, I see that Shemp Howard played a role in the film. I didn’t recognize him, but that means this film is Abbott and Costello and a Stooge. So it was like a bonus.

Also, two of the bits in the book come when Costello, who has been played up as a great African hunter, tells exploits to two men he meets. One is Clyde Beatty and the other is Frank Buck–both actual celebrity animal collectors who played themselves. I have to wonder who amongst the audience in 1949 would have recognized them and gotten the joke before the moment when they reveal their real identities to Abbott and Costello. I mean, this is before television. I would have had a tough time picking Marlin Perkins out in a movie in 1980. Of course, when Mutual of Omaha’s Wild Kingdom came on, I often changed the channel. Which is why I can hear Perkins saying the title of the program but not much else about it.

At any rate, an amusing little film that you probably won’t find streaming anywhere even though I’ll bet it was on television plenty back when we only had limited options.