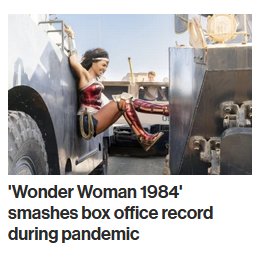 The headline on the article is a little more, erm, accurate: ‘Wonder Woman 1984’ hauls in $16.7M with highest box office opening during COVID:

Released on Christmas Day, “Wonder Woman 1984” was the highest box office opening of the pandemic, hauling in $16.7 million in ticket sales in the US and $36.1 million globally, according to Warner Bros.

During the football game on Sunday night, they mentioned that Aaron Rodgers was about to break–and broke–the record for the most touchdown passes thrown in the second quarter of a regular season game.

Sports records, and apparently all records, are getting very granular indeed to make sure that every game or every movie or every celebrity somehow gets to break one in an artificially historic moment every time they make a doody.

Question to ponder: Is it more because of the modern participation trophy mindset (I have a collection of medals for runs and triathlons I have merely finished kept separate from medals for events where I actually, you know, won or placed) or is it more because commentators and talking heads of all stripes have to fill up the dead air with something? Or is it an even balance of both?