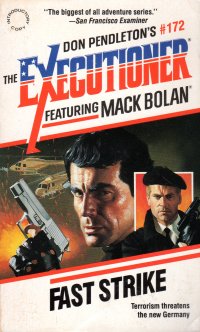 The last Executioner book I read was Hawaiian Heat, #155, so my collection has jumped ahead seventeen. My collection has a couple of near runs left–a handful in the 170s to about 182, then a dozen or so in the low 200s, and then 305–but these gaps are going to be a little jarring considering that I’ve read a fair number before now in relative proximity. Also, I look back at when the books were on the rack at the grocery store and think about what I was doing at the time. We’ve leapt ahead here to the second semester of my junior college. What was I doing? Working a pile at the grocery store, writing still decent sonnets about my college crush, but not wearing the trenchcoat and hat yet nor doing open mics–those would come senior year.

Oh, well. You’re here, gentle reader, to hear what Mack Bolan was doing. Or, more likely, you’re kind of scrolling by to get to the amusing things I sometimes post. Carry on, then.

Mack Bolan is sent to Germany as it’s unifying as someone or some group is killing spies, businessmen, economists, and other people who support reunification. So he’s got to navigate the shadowy world of many different powers working together and against each other, including a woman who is simultaneously working for the Stasi, the French secret police, and the CIA–will she be Mack Bolan’s ally or doom? Spoiler alert: She’s beautiful, so of course she’s less doom and more boom chaka chaka.

The book is paced with a more modern thriller sensibility: Bolan is dropped right into the maelstrom and the set pieces come quickly, with Bolan not sure what’s going on or who the real players are. The book also features car phones and lap-top computers, so the stories are catching up with modern times as well–although in 1993, the laptops were pretty clunky as I recall. I bought a refurbed Windows 3.11 laptop which I still have around here somewhere in 1996 or 1997, and it’s a chonker. I remember seeing a portable 286 from the early 1990s, and it was the size of a small suitcase. But from here on out, I guess the books will have a more modern sensibility–and it’s probably only a couple of years before Bolan starts using the Internet himself.

So it was a pretty good entry in the series, and I am looking forwardish to the next couple in the series from the time when I was graduating college.

And given how few of them I have left and how much I have been tearing through them this year, it’s entirely possible I will finish the paperbacks purely in the Exeuctioner series in the next year or so. Although I guess I’ve only read seven this year, so if I have a couple dozen left, it’s probably three years off. Or more.

Well, consider my enthusiasm curbed. It wouldn’t be the same as reading The Story of Civilization or The History of Philosophy or even The Complete Works of Shakespeare, but it would be something.