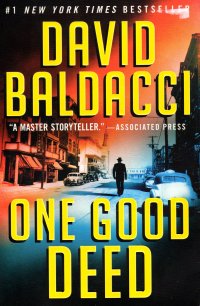 On a recent visit to the Kansas City area, my aunt said she was looking to get rid of some books that someone had given her, so I took the lot. Which was good, as I was staying in a hotel that night and had somehow failed to bring a book to read. Atop the stack was a book by David Baldacci; I kind of recognized the name because my beautiful wife has been known to get his books from the library from time to time. So I started with this one.

It starts with an ex-military man named Archer getting dropped off a bus in a small town, and I thought, Aw, man, I’ve already read this book. But it’s different: Archer is getting released from prison and taken to a starter town where he will be on parole. He gets offered a job by a rich and somewhat shady fellow, the town’s leading citizen, collecting the collateral on a debt from the the other rich man in town. As Archer investigates, his employer is murdered across the hall in the hotel the night after Archer has relations with his employer’s mistress, who happens to be the daughter of the man whose car he is supposed to collect. So he finds himself arrested for the murder and has to work to clear his name. As he investigates, he finds a plot not unlike those you’d find in Chandler or (the author featuring the other Archer) Ross MacDonald.

The book is set in 1949 or thereabouts, so it has a bit of an anachronistic feel but with modern sensibilities and prose styles–it’s definitely less dense than Chandler, MacDonald, or even Hammett.

It’s a little thick, though, in keeping with modern times that charge $17 for a mass market paperback, and to be honest, I had a little trouble getting into it as a lot of the front of the book was lavish in the description, building the world of Poca City and the post-World War II milleiu for those of us not steeped on novels of the time or books from the 1950s and 1960s. But after a while, the descriptions lighten into the action, so the pace picks up. But the author still likes to go long on descriptions at times–Archer walks into a lavishly appointed room, and we get three or four long paragraphs describing the opulence of the furnishings before mentioning the man in the room. You know, I would track the description a little closer to how the protagonist’s attention would track: Man, things around the man, and maybe then other things not near the man. But this book is told in third person, so I guess you don’t have to jibe description with attention exactly, but it’s something I would do.

At any rate, I enjoyed the book enough that I’ll watch for other books from this best-selling author at book sales in Nixa and Ozark (the Friends of the Christian County Library book sales, should they ever happen again) or at garage sales. I don’t like them enough to run out and spend $17 or $30 on books new, though. To be fair to this author, I don’t really buy many books new, at full prices these days. Although perhaps in a frenzy at Barnes and Noble or Books a Million, I might buy his work for $8 or $10 from the discount rack. When I am in a frenzy. Because when I am caught up in that moment, $10 for a book doesn’t seem too much.