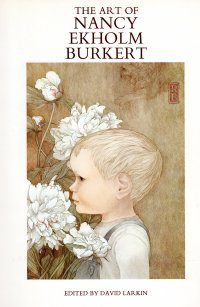 Nancy Erkholm Burkert is a Wisconsin- and maybe even Milwaukee-based illustrator and artist, and I never heard of her before. Which is probably a ding on my knowledge of Wisconsin, but in my defense, I was not browsing art books all that much in my school days. Although I did go to the Milwaukee Art Museum fairly frequently, and surely it must have some of her work, ainna?

Basically, she got her start and cut her teeth in illustrating children’s books, including James and the Giant Peach back in the day, and later (that is, mid-1970s) she got more into oils and sculpture. Most of the work depicted in this volume, though, are the illustrations which are elaborate and realistic–well, as realistic as you can get in a children’s book, anyway.

The intro text is a bit heavy on the criticism–that is, the discussion of the artist in relationship to other art and whatnot and less biographical, although it is not exclusively critical. But, again, as a casual reader/browser, I prefer a shorter more biography-focused introductions. Although perhaps if I were to specialize in one kind of art to view, I would really get dialed into the relationships and influences more than I am.

Wikipedia indicates that she is still alive at 87, but seems to indicate her career highlights end around 1990 as the thin Wikipedia article would indicate and the lack of a personal Web site might attest. Which is a shame. I would rather look at her work than, say, Patrick Woodroffe’s. And were I in Wisconsin, I would be hopeful that I could pick up one of her original illustrations at a garage sale or something. Or at a silent auction at the Milwaukee Art Museum, where in 1994 or 1995 I once bid a week’s pay on a minor illustration by Picasso, true story. Which I did not win, by the way, and I don’t even like Picasso. Nancy Erkholm Burkert? I like her work.