Walmart tends to have racks at the front of the clothing sections with seasonal merchandise tied to upcoming holidays, probably including Valentine’s Day, St. Patrick’s Day, Memorial Day/Independence Day (flags and whatnot can apply to both), Halloween, Thanksgiving, Christmas, and probably a bit of New Year’s Eve.

Starting when the boys were just coming into school age, I’ve often picked them up a Halloween shirt. None of the other holidays; only Halloween.

For many years, I bought them matching shirts–that is, shirts with the exact same design. Generally a pumpkin-themed shirt and not one of the more daring designs with zombies or anything. I didn’t want to frighten them or their classmates–later, the younger kids at their Lutheran school.

When younger, they often delighted in having matching clothes and would sometimes wear the same thing to school, including their Halloween shirts.

The penultimate purchase or two, I bought different designs for them as they’ve gotten older and have their own independent styles and want to be differentiated from their sibling.

However, this year, when I was at the Walmart for more practical needs, I saw that the Halloween shirts were out, so I again bought them the same design. 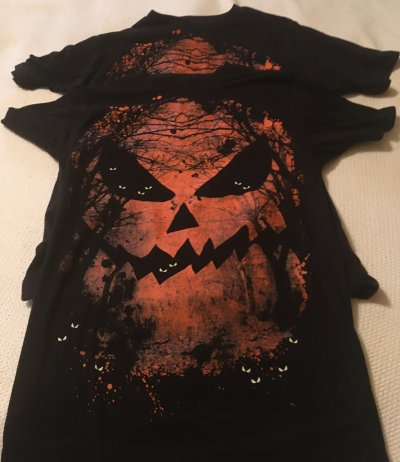 As is the wont, I picked these up when they were in school, and I put them in their shirt drawers without commenting on it. They discovered them, and although they no longer squee with delight when they find these things, they have both worn the shirts several times in the first week. The youngest will wear the shirt year-round and not just during Halloween if the past is any guide. Maybe the older one will, too; he didn’t like the last design, two skeletons where one is holding the other’s spine with the caption, “I’ve Got Your Back.”

You know, when they were younger, I could delight them with surprises like this. New shirts, new socks, new Spider-Man sheets on their bed. Now, they’re more sophisticated. They still enjoy these things, but they can’t squee any more as they’re young men.

Or so I tell myself as I still like to get them little gifts from time to time as a sign of affection.