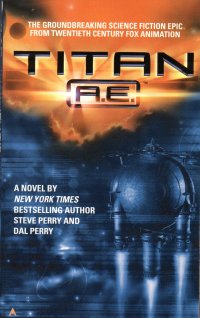 Ever since I bought this book at the Friends of the Kirkwood Library book sale in 2008, it’s been on the tops or fronts of my bookshelves where paperbacks fit when double-stacking books. So the book has often been visible, and many times I have picked it up and thought about reading it. It was not the time, then. It was that time now. Or this week, anyway.

The book is a novelization of the 2000 animated film that I have not seen. It seems to me that a similarly flavored movie came out at about the same time, but I cannot remember what it would have been, and although I have done a bit of research, I don’t know what I might have been thinking about. Twenty years ago, I was not so into animated films that it would have made too much of an impression. Just enough, I suppose. Also, I would like to defend myself that I am not into animated films even now, thank you very much, and I have not read a comic book since my favorite comic book shop closed up last year.

At any rate, the book details the story of Cale, the son of a prominent scientist/engineer. Fifteen years after the destruction of earth by a race of energy aliens called the Drej, humanity is scattered, a refugee race without a home world. A former associate of Cale’s father shows up at the backwater junkyard asteroid where Cale is eking out an existence and dreaming of building his own ship. He wants Cale to help him find the Titan, the ship Cale’s father built before the destruction of the earth. The mixed species crew of the associate’s ship keep almost a step ahead of the Drej as they use a special ring Cale had as a guide to the Titan. When they get there, they discover the associate is working with the Drej in their quest to eliminate the Titan, which was prophesied to be the end of the Drej? Something.

You know, like the Robotech book I read in 2016, I suspect that the novelization here has a depth that the cartoon itself doesn’t. I quibble with some of the timeline: The book is set 1000 years in the future, but humanity doesn’t seem to have changed, and the earth’s destruction was fifteen years before the book, but humanity has seemingly forgotten it even though much of the human population should remember it fairly clearly.

That aside, the book is akin to Heinlein’s juvie fiction, a rocket jockey story with some interesting depth to the villains as well and perhaps a twist or two that were unnecessary. But a pleasant little read.

Apparently, the book has a couple of prequels and a comic book series prequel. The video game rendition was cancelled, though, and I guess the intellectual property lost its lustre sometime the same year. Which means it’s ripe for a reboot, amirite? This time with live action, and Matt Damon can be the father instead of voicing the son.