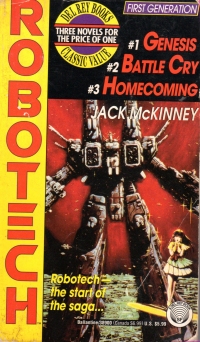 This book contains the first three novelizations of the original Robotech cartoon series called the Macross Saga. Within it, an alien super spaceship crash lands on the earth, and the nations of Earth put aside war to study the ship and to rebuild it to defend should aliens come looking for it. When the aliens do, ten years later, the crew of the vast ship have only barely begun to understand its secrets, but they must defend against the aliens who attack with greater numbers and greater technological understanding.

The first book, Genesis, introduces the characters and some of the history of Earth and the Robotech project. We’ve got a wizened commanding officer of the ship; an all-woman bridge crew; an ace pilot; an inexperienced young pilot; a pretty girl who might be interested in the young pilot; and so on. After the alien attack, the ship lifts into the air and performs a hyperspace jump from within the Earth’s atmosphere, which carries away part of the Pacific island on which it crashed and the town that had grown up to support the research. Instead of just reaching orbit, the ship jumps to the outer edges of the solar system. The ship, the SDF 1, and its crew rescue the people that jumped with it and rebuild the city in one of the vast holds on the ship.

In Battle Cry, the alien fleet has found the SDF-1 and attack it a couple times as the ship makes its way home to earth over a number of months (as they do cannot make a hyperspace jump).

The first two books in the omnibus here are the better two; the third kind of leads to a continuation of the series and is not quite as self-contained.

But, you know, I have read a lot of television and movie tie-in books, and this set adds a lot of depth to a television cartoon series. They read pretty well without foreknowledge of the mythos, and they delve more deeply into the alien psychology and the motivations of the humans. Better than you can get in 20 some minutes of imported Japanese animation, anyway.

So it was a passing bit of space opera, but I’m not eager to run out and buy the rest of the series. I was disappointed, as I implied, with the end of the last book and its mere passing of the torch onto the next in the series without some sort of story arc ending and fear that the other books in the series would be more of that same.

But I’ve started to watch the cartoon series with my children, so we’ll see if it spurs us onto better shared memories.