Last night, I was telling my oldest child about how my grandmother used to take my brother and I out of school for a day once a year, and she would take us different places in Milwaukee. She took us to the Milwaukee Art Museum, but she did that more than once and more than on the day with Nana because she managed the gift shop at one point and could get us in without charge. She took us to the Milwaukee Public Museum which had the Streets of Old Milwaukee exhibit. She took us to the downtown library, where you could check out an Atari 2600 and a game cartridge for blocks of an hour (and I foolishly picked Space Invaders, but my brother picked E.T.: The Extra-Terrestrial, so you can guess that was a long hour for us).

And one time she took us to see the dolphin show at the Public Natatorium. In Milwaukee. Probably in the winter.

We didn’t actually see the dolphin show; as it was a school day and we were the only kids in the audience, the dolphin trainer had us come help with the show. So we held up fish whilst the dolphins leapt and held up the hoops the dolphins darted through. Although after the end of the show, I was feeling comfortable with the dolphins and reached for it, but the dolphin chattered in a way that scared me, so I backed off.

I told my son the story, and then I went to the Internet to back me up on this.

OnMilwaukee has stories about the public natatoria built in Milwaukee in the latter part of the nineteenth and the early twentieth centuries which include the first indoor pool in the United States. The Old Milwaukee blog has the rest of the story about how entrepreneurs briefly turned the last of the natatoria into a destination restaurant with the dolphin shows. 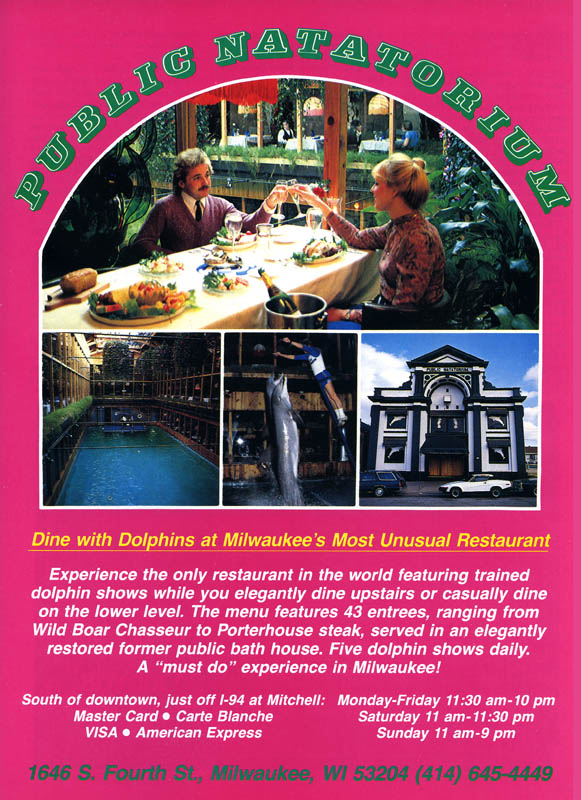 The dolphin shows. In a restaurant. In Milwaukee.

The past is an unbelievable place.