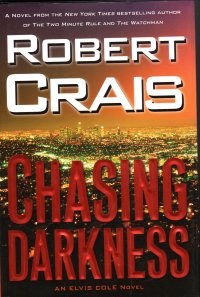 But it was on my to-read shelf, so I read it again anyway. Robert Crais might be the only modern writer whose works I can read and re-read like I can with John D. MacDonald’s work.

So Cole had gotten this guy free from a murder charge, and the guy apparently kills himself with photos from that and other killings on his lap. Cole doesn’t like the thought of having freed a killer to kill twice more, and then he suspects that perhaps the dead man was not the actual killer. So he goes to work.

The book is told in pure first person narration without jump cuts that most modern writers use. Even Crais uses them in later books. Somehow, it seems a more connected and flowing, a purer, literary style. And a throwback.

A couple things struck me mostly about the passage of time.

Elvis Cole does tae kwon do kata on his deck; twelve years ago, I could not have imagined that I’d be a black belt in tae kwon do, basically, the next time I read this book. Although my school is a satori school that does not focus on kata.

Also, I said then:

A good book overall and one that keeps me interested in the series, which makes it one of two contemporary series I appreciate (Sandford’s Lucas Davenport being the other).

Yeah, well, not so much now.

So will I end up “accidentally” buying more Crais books at book fairs just to read them again? Maybe!