Yesterday, I took the boys up north to the Ozark Empire Fairgrounds to attend the Friends of the Springfield-Greene County Library book sale where I predicted I would gorge on $1 record albums.

Which proved truer than I thought.

I bought a bunch. 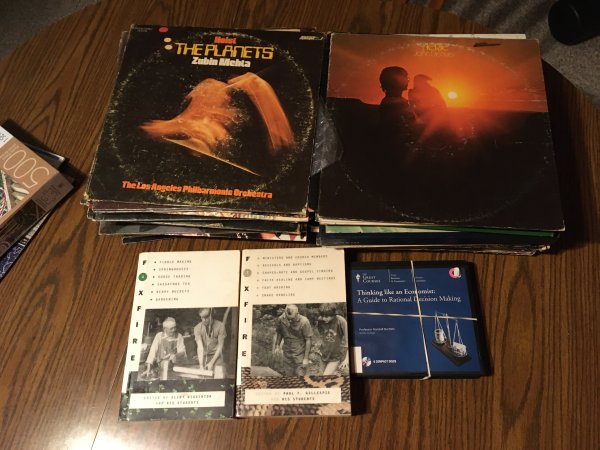 So that’s over sixty records counting the box sets for a little under $60. I will probably need to order more Mylar sleeves and build more record shelving, though.

I also bought two Foxfire books, #4 and #7, and a Great Courses CD set called Thinking Like An Economist. I looked at artist monographs, but I wasn’t willing to pay six or ten dollars for them. I have commitments that will keep me from attending the lowered price days this weekend, so I’d better pace myself on going through what I got. Fortunately, I won’t be watching any more baseball games this season as the Cardinals were eliminated from the playoffs, and commitments keep precluding me from watching football.

My boys found a number of books which they could not wait to get into. I’m glad they did, as they sometimes get really bored and impatient with the whole book sale thing. I’m pretty sure they only agree to come because we have a new tradition of stopping at Five Guys afterwards for a burger.

So not a lot of books to add to the to-read shelves, but a new stack of records that it will take me weeks to listen to. Although when I move the stacks upstairs after writing this post, I will leave the John Denver record on top, and I wager it spins this very morning.