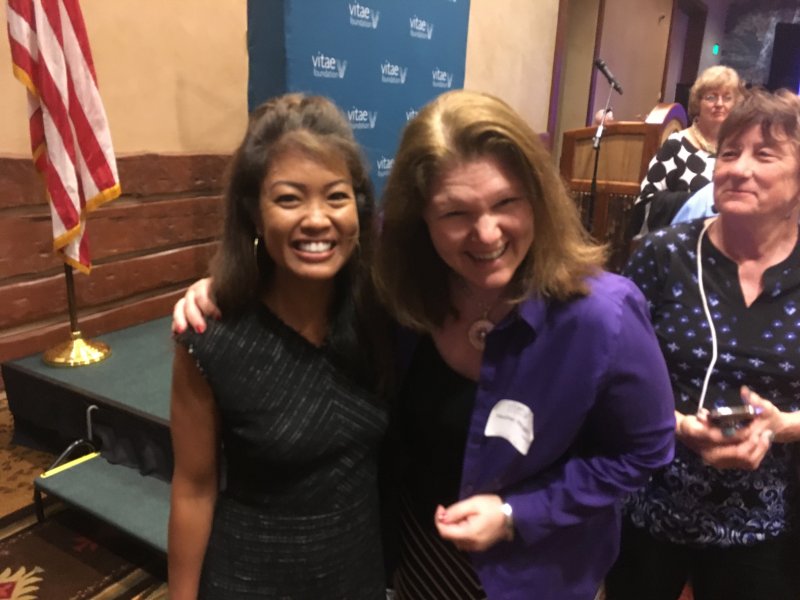 As I mentioned in the book report for Who Built That?, we were thinking of going to see Michelle Malkin speak. Last night, we did.

I spent the whole evening telling the various high-powered other attendees of the annual Vitae Foundation event that my beautiful wife once modeled a clothing line with Ms. Malkin.

WHICH IS TRUE because they both appeared in the IMAO Peace Gallery wearing Nuke the Moon shirts.

Were they wearing clothing for promotional purposes? Yes. AKA modeling a clothing line which only had one offering, so it was geometrically more of a clothing dot.

As I’m relying on pictures of my beautiful wife as Rule 5 material here on the blog so much recently, I’ve started to wonder if I’m turning into an Instagram husband. But in my defense, I had to remind myself that the previous picture was from a local business magazine.

And, yes, I could have said I modeled a clothing line with Michelle Malkin as I was in the Peace Gallery, too, but, come on. That does not flatter my beautiful wife, with whom I dispute whether she was any higher than result #3 on the Google Image Search for legs back in the day. She says she was higher, but when my co-worker told me about it, she was #3. Unstated: Why my co-worker was searching Google image searches for legs. I would have mentioned that fact about my wife at the Vitae event, but that might have mortified her.