A long time ago, the non-Lexus vehicle stopped unlocking when you put the key into the lock and turned. Apparently, this is not a physical act but an electronic one, whereby a chip in the key tells the door to unlock. So either the key chip or the sensor went on the blink, so I started carrying a fob (and feeling like a fop for pushing a button to unlock the car.

Then, the little plastic loop that kept the fob on the key ring developed a crack and fell off the key ring. I was able to fix the little crack with a little epoxy.

Then, sometimes, the jump ring would part just enough so that the fob could fall off through the weakened, thinner repaired section. I learned not to lock the doors with the switch on the door when leaving the vehicle after the fob fell off inside the car and I thought I’d locked it in the car (which does not open with the key, remember).

However, at the end of last week, the fob’s repair epoxy came loose and seems to have taken more of the plastic with it. Enough that I don’t know how well I could fix it with another drop of epoxy. 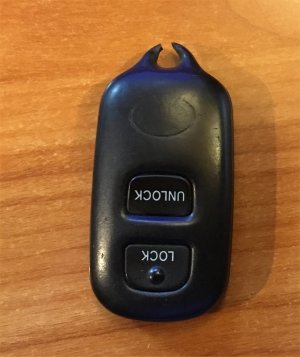 To replace it, of course, would be hundreds of dollars.

I’ve been thinking about how to affix the fob to a keychain. I thought about wrapping it like a jewelry pendant; I even bought three dollars worth of 20 gauge wire on Sunday. However, my early attempts did not look like this: 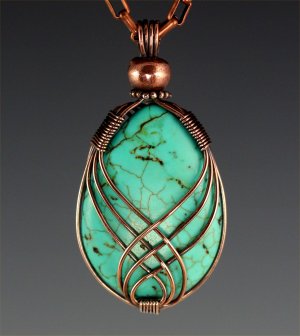 So I thought of other things. Affixing it to the end of a belt with a leather bezel. Then I thought: Oh, yeah. I have lots of plastic needlepoint canvas and yarn.

So I built a little case for it and sewed on part of an old swag lanyard. 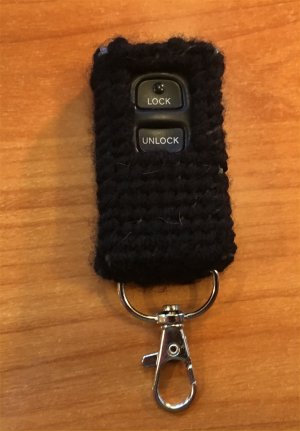 It looks a little fru fru if you look at it closely, but I don’t plan on letting anyone look at my keys closely.

And it was cheaper than a $400 replacement.

And it has no danger of poking holes in my pockets like my amateur attempt at wire wrapping would have.

So I’m a little proud of it. But like my record shelving (still only partially painted, weeks later), it’s rudimentary but functional.

Which could be a metaphor for me.

2 thoughts on “A Four Hundred Dollar Millimeter of Plastic Averted”