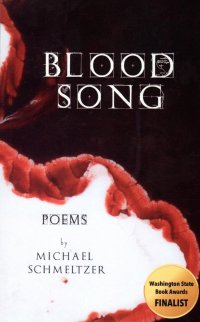 Well, gentle reader, as you might know, my beautiful wife is is a poet of some reknown and publication credits. So I had resigned myself to being the second best poet in the family. However, as this collection of poetry comes from my cousin’s husband, I might only be the third-best. Until my children start expressing themselves in verse.

As you might expect, gentle reader, I cannot say anything bad about the book at risk of not getting invited to family reunions, although I actually haven’t been invited to a family reunion since 2007. Schmeltzer’s poetry is more modern than I prefer or write. I liked elements of it better than most things I read, but I read a lot of chapbooks of amateur origin (like this and this) when I’m not struggling through the long, long poems of British Romantic poets (I read this book as a break from Keats; currently, I only have “Hyperion” in his long poems left, but it’s harder to slog through it than “Endymion” for some reason). Schmeltzer’s modern sensibilities reminded me a bit of David St. John, but that’s because that’s the best of the modern stuff I’ve read recently.

At any rate, Schmeltzer covers some ground that’s topically in my wheelhouse: the death of parents, relationships, and whatnot. However, some of the poems are a bit obscure, a collection of images that sort of hint at something, that didn’t tie it up neatly. Which might have been part of the point, I suppose.

I might have put my finger on a dichotomy in two different types of poems and rhythms: the paper rhythm and the spoken rhythm. As you might know, gentle reader, my poetry is steeped in performance in open mics, so my lines tend to be longer. A lot of modern poetry, including some of Schmeltzer’s work, has shorter lines. I wonder if they’re written to be seen on paper instead of heard aloud. When I’ve heard Serious Poets reading these kinds of poems in the university, they pause ponderously after every image or phrase. I blame William Carlos Williams. It’s not how I like poetry–I like longer lines and better sustained rhythm, I guess. Which should mean I love Keats, right? Well, he and the other Romantics had an outsized influence on my early poetry, I rediscover when I go through it.

I’m not saying that Schmeltzer is particularly guilty of overly truncated lines and unneccesary enjambment; it’s just what I thought of as I was reading what he wrote and relating it to the other things I’ve read.

So I liked it better than most of what I read. And, if you need the ultimate endorsement, I read one of the poems to my beautiful wife, and she nodded with her chin low and her eyes rolling up as she said, “It’s good.” Which is a sign of true excellence in her estimation. So she’d probably give it five stars instead of four.