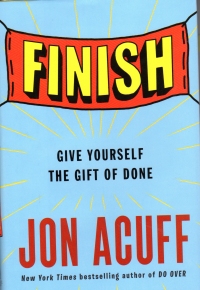 My beautiful wife eats self-help, goal-setting, accomplishment-preceding books like this up. Me, I tend to prefer my self-help books to be written by philosophers and Buddhists rather than itinerant life coaches. I mean, when you go to the local weekly entrepreneur’s event, it’s chock full of these peppy people who want to build business empires on the weight of their optimistic messages. And yet, as I have bookshelves chock full of unread books about everything except chemistry, apparently, I have many titles like this lingering about, so I might as well read one from time to time.

So, this book is not about starting projects/dreams/goals, it’s about finishing them, and it identifies very early perfectionism as the villain that keeps one from finishing one’s goals. It does lay out some pretty good points about how trying to be perfect often causes one to stumble or quit something the first time one encounters something, an obstacle or lapse, that destroys a dream of perfect resolution to one’s goals or projects.

But it carries on the conceit a little to far and applies the term perfectionism to other obstacles where it doesn’t really seem to be the operative problem, such as bad personal habits. It turns what was a valid insight into a schtick to tie the book together in ways it didn’t need.

Still, I got a little out of the book and flagged a couple of bits.

One is a section entitled How to Read One Hundred Books A Year. Oh, I know how to do that: lots of picture books. Although this author says comic books are allowed; once I hit that passage, I put the book down and picked up a comic book.

Second, he refers to Michael Crichton of Jurassic Park fame. Personally, I think of him as of The Andromeda Strain fame because I read that book in middle school, before Jurassic Park came out. The author is talking about how the television show ER came out, so he’s might be more informed on Crichton from his works made into films and television shows (although The Andromeda Strain was adopted for the big screen and, much later, television).

Also, he mentions several times that you should start a blog (party like it’s 2005). Strangely enough, that’s the same advice I got from a business coach from the local entrepreneur event: start a blog and go viral. Welp, I’ve started, what, eight blogs in he last 20 years (this one, QA Hates You, Pop-Up Mocker, Draft Matt Blunt 2008, The Beading Will Continue, Found Bookmarks, The Weakened Gardener, and probably others I’ve forgotten, and I contributed to 24th State for a while). To be honest, they didn’t do much for me. Even with a sixteen year presence here, I don’t get that much traffic, and it hasn’t helped me push enough books to cover the cost of publication (a professionally designed cover on John Donnelly’s Gold and a fifty-freebie-book publicity push put me in the hole quite in the hole on that one). So, yeah, I suppose it could help in some regards, but going viral is not in the cards for a lot of people, so social media engagement might just be busy work on your way to a goal.

Your mileage may vary.

(For related musings from me, see For Me, The Hardest Part Is Not Starting from 2012.)