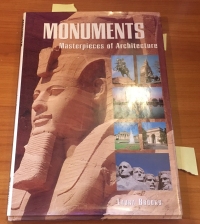 This book is a little different from some of the coffee table tourism books I’ve read before that focus on a state or city. Instead this book focuses on monuments around the world, from the pyramids in Egypt to the memorials in Washington D.C. The images within it are big and color, generally just one of the mentioned monuments. The text, though, is kinda of bland and vanilla, kinda just talking very generally about monuments and not offering a whole lot of insight into the individual monuments or their construction.

I flagged some items, though.

The Monument to the Third International is another ambitious symbol of national idealism, but, unlike the Statue of Liberty, it was, unfortunately, never realized. The Soviet architect Vladmir Evgrafovic Tatlin (1885-1953) planned the monument in between 1919 and 1920 to house th legislative offices of th new revolutionary government in Leningrad. Tatlin conceived of a gigantic spiral of wood, iron, and glass that would reach the almost inconceivable height of 1,300 feet (396 meters). It was to span the Neva River, and encompass three glass-walled buildings that would revolve at different speeds–one would take a day to complete a turn, one a month, and one a year–while ligh beams projected skyward from the roof. The Monument to the Third International presented a vision of the technological utopia and reshaping of society that Communism promised. Its unprecendented form suggested a break from history and a ne architectural and social order. Had it been achieved, it would have combined the elements of time, movement, energy, and scale in a way never before realized in one monument.

The book lists two such memorials: Peace Park in Hiroshima and the Holocaust Museum in Jerusalem. So saying “throughout the world” is quite a bit of a stretch here. I don’t expect you’d find many such monuments in Saudi Arabia or Iran, but I could be mistaken.

We think of monuments as enduring, everlasting, and permanent–as indeed they are meant to be. But many of the world’s greatest monuments are in peril. During the last fifty years, pollution has devastated the world’s monuments.

You know what has devastated monuments since the book was published? Groups destroying the monuments of the disfavored, whether it’s the Taliban destroying ancient Buddhist statues or American leftists pulling down statues of historical figures who were not 21st century Woke.

So it was a relatively quick browse, a couple nights/hours. I have a large number of coffee table or set picture books like this. Perhaps I’ll focus on them a little more this year to clear some of them out and to bolster my annual numbers.