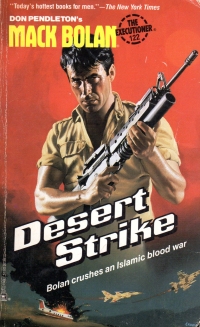 This book isn’t a complete waste of time, which was the wish I expressed in the report for Twisted Path. Mack Bolan doesn’t smoke a cigarette, for example.

The plot: Someone is killing off the Saudi royal family, and it looks like the Iranians and the Russians are working together to install a puppet monarch on the Saudi throne. Bolan goes to Saudi Arabia to uncover the plot, and it leads him and Grimaldi into an assault on a compound at Mecca.

It’s an odd duck of a book; I was first pretty satisfied with it, but then the set pieces in the plot were kind of clumsy. I don’t know how much to ascribe to the writer or to the people who prepared the plots. But the set pieces don’t really seem like they’d be a good idea to advance to the next, and then Bolan charges in with guns blazing. So the writing was okay, but the set pieces were faulty.

Although the book contained a couple of mistakes:

The men were Arabs, probably with the ayatollahs–Iranians in Western dress carrying compact Russian automatic weapons.

Iranians are not Arabic. As I was reading, I wondered if I could tell Arabs from Persians and Semites based on appearance. Maybe, maybe not. But in plain text and history, I can.

Also, at the very end, they crash land a plane that has run out of fuel, and it explodes. Which is one of the nice things about an airplane running out of fuel: The explosions are much lesser.

Still, not a bad entry, but it might be until next year until I get to another, especially as I realize I have not read a Christmas novel yet, and I will have to do so on an emergency basis.