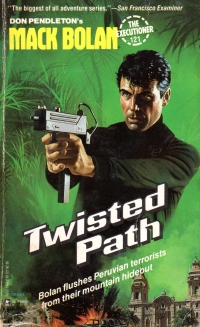 This book is better than the preceding installment (Border Sweep). In it, Bolan gets tapped to find out who killed an FBI agent who was investigating a weapons manufacturer who might have been sending a few shipments of military-grade weapons to a South American gun runner. Bolan does, but he gets the dirty executive to give him the contact in South America. Which leads to Bolan to Peru, where a trap has been set for him that sends him to a dark Peruvian prison, where his only hope for escape lies with members of the Shining Path–members he hopes to eliminate when he gets out.

It has more of an original Bolan flavor than Border Sweep with some philosophical asides that are a little like Pendleton used to do, but it’s not a completely flawless effort.

Still, it’s better than the one before it and gives me hope that, when I take a break from other things with one of these books, it won’t be a complete waste of time.