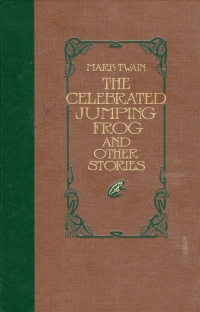 I have this collection in the Reader’s Digest World’s Best Reading edition, which is a series I pick up when I can find them cheap. They’re nicely put together, they often come with a little biographical pamphlet about the author, and they put the academic material where it belongs–at the end of the book, not ahead of the primary material.

This volume collects a number of Twain’s short stories, including:

Of the stories, I especially enjoyed “The £1,000,000 Bank Note” wherein a San Francisco trader is lost at sea, rescued, and delivered to London with nothing; there, two rich men give him a very large, uncashable bank check to see if he can make it a month with them to settle a bet between themselves. The trader does with elan. I thought the story was going to lead to a situation akin to the film Trading Places, but it was different. I thought “Extract from Captain Stormfield’s Visit To Heaven” was clever as it grappled with some questions about what Heaven, God, and the Bible might mean galactically. I was startled by non-Disney endings to “Was It Heaven? Or Hell?” and “A Dog’s Tale”. And I might remember the stories, which is about the best that one can expect over the years.

I noted with interest that the bear in “A Fable” is named Baloo, but I cannot determine if it preceded or followed Kipling’s bear from The Jungle Books. I haven’t found a date on this story easily on the Internet, so I don’t know which came first, but it’s likely a bit of tribute between the writers one way or the other.

At any rate, good stuff, a bit of fun, and it counts as a classic in my internal virtuous reading signaling.