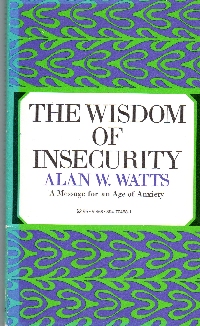 The title of this book certainly fits into the philsophy kinds of books that I might like to pick up. Its size (short and paperback) meant it would make a good carry book for me. It did. As I was reading it at the dojo, a very well-read teenager there recognized Watts’ name. After I finished it, I saw a Facebook image with a Watts quote on it. So his influence continues, some thirty-five years after his death.

At any rate, this book was originally published in 1951, so it’s steeped in the Existentialist zeitgeist, but it’s not really an Existentialist book. Watt was at one time a clergyman, but he switched over to Buddhism as a relatively early American adopter (and he knew Shunryu Suzuki). So this is a bit of a spoiler alert. I detected some of the Buddhist themes in the work along with some response and comment on other philosophers’ work, but not so much by name.

It’s a popular bit of philsophical musings. That is, it grapples with some of the main themes in life instead of being a comment on a particular school of thought. The gist of it is that life is changing and fluid at all times, and the more you try to crystallize it into something specific, you lose it. That is, defining a word takes something away from the thing being defined. Also, the early traces of the Mindfulness movement are here, he posits that only the present is real and the past and future are not. So we get into the real nub of Buddhist theory of consciousness, which ultimately doesn’t seem to work: The “consciousness” in the “present” is not the same thing as it was in the past nor is it the same thing that will experience the “present” different from this one. If you accept a certain evolution of the person, the being, the soul, you can sort of think this is right, but the Buddhist thought says, no, literally, the consciousness who came to my blog is not the same one that right now is finishing the third paragraph of this book report.

So there are lessons one can take away from the book, which are basically the things you find in Mindfulness listicles all over the Web. Try to improve your mindset and adaptability to changing circumstances; let go of the past; don’t worry about the future; enjoy the present as it is. But unlike a listicle (and contemporary Mindfulness books written by the listicle authors), the book has depth in exploring some ontology and epistemology.

So a good read, and apparently still relevant if contemporary high school kids, albeit precocious ones, talk about the author.