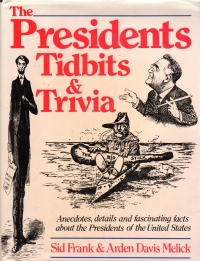 This book is a coffee table sized book of small trivia bits about the presidents (through Ronald Reagan, although someone helpfully appended Bush, Clinton, and Bush in pen at the end of one list). The material is not sourced, and it’s not reliable–two separate vignettes give different stories about Ulysses S Grant’s name (one is that he has no middle name; the other is that he became US Grant when someone filled out his application to West Point incorrectly, not using his real name, Hiram Ulysses Grant). And this is a later edition of the book, which was first published in 1972, so some things have been updated to reflect the new presidents (Ford, Carter, and Reagan), but some of them have not.

So you wouldn’t want to cite this book in a paper (well, unless you’re a journalist working for a paper, in which case there are no consequences nor even embarrassment for getting something wrong).

But it did remind me of some of the presidents that one doesn’t think of often and made me want to read a biography of them. Polk and Taylor come to mind, actually. But the relative dearth of biographies in the places I look (book sales and church rummage sales) will ensure I don’t rush out and buy a number of these books to put on my shelves for years.

So I got something out of it, perhaps just as much as one could expect.