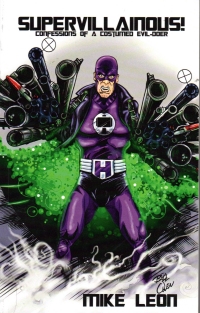 This is the other book I bought by Mike Leon when I bought Rated R. Upon further reflection, I did not buy the books because I saw them on a blog; I bought them because a fellow I know from my martial arts school (the same fellow who briefly turned me into a Sinophile) posted a link on Facebook to one of Leon’s frequent book giveaways. The strategy worked, as although I didn’t win a free copy of the book, I bought two at full price.

In the book, a magazine reporter (“Mike Leon”) is writing an article on super villains, and he embeds with a minor league bad guy calling himself Hammerspace because he does the trenchcoat schtick (a term I myself learned five years ago). As Hammerspace teams up with other villains to fight the bad guys, he climbs the ladder of villany because he is direct and evil, unlike some of the other bad guys who only want to look good in beating the bad guys and maybe, just maybe, earning a cross-over, where super heroes team up to fight them.

The book is a fun through-the-looking glass parody of common comic book tropes, and it’s fresh even though parodies of comic books are a genre onto themselves. I enjoyed this book better than Rated R, as it better suits my tender sensibilities. I, Brian J. Noggle, author of John Donnelly’s Gold, do solemnly swear or affirm that this book is better than the Selected Tales and Poems of Edgar Allan Poe. Which is less of a quotable blurb than the one I gave for Rated R, so it’s unlikely Leon will put it on the Amazon page for this book as he did with my favorable comparison of Rated R to The Grapes of Wrath. But after a months-long slog through the Poe, I tore through this quickly.

I’ll probably even pick up another copy of the book (at full price, no less) for my nephew for Christmas. Let that be a testament.