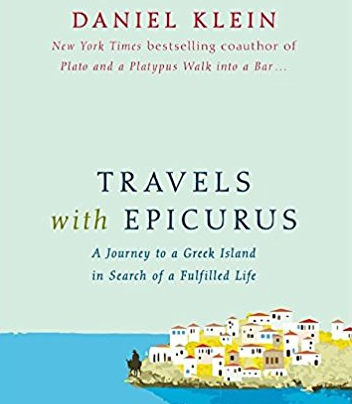 I picked this book up from the library because I again forgot a magazine to thumb through while my children did their library things and because the philosophy lecture series I’m listening to took Epicurus beyond the word “epicurean.” The library doesn’t often carry the complete works of Epicurus, so I made do with something with Epicurus in the title.

The author of the book has a dental issue, and his doctor offers implants. The author is in his early 70s and considers how long implant treatments will take compared to how long he might live—hey, my family lost their teeth in their 30s, so I’ve been thinking like this for every dental appointment since I was in my twenties (which explains why I didn’t get braces twenty years ago). Instead of spending two years or so going through the painful treatments, the author decamps to an island off of the coast of Greece with a couple of philosophy books to learn what the old philosophers had to say about aging gracefully as contrasted with the modern imperative to try to stay young into your old old age.

The author, who has written many books on pop culture philosophy, goes through Epicurus and other philosophers including the Existentialists and whatnot, as he sits in his rented digs or in the local tavern where the other old men hang out. It is a bit of a ranging discussion, with lots of quick flourishes of explanation as to what other philosophers were about. I’d like to think I could hold a conversation like this: It’s a summary instead of a deep academic dive into the individual philosophers.

Basically, the right way to age is to accept the slower pace afforded the elders and to enjoy the breadth and depth of your memories. This is old age, contrasted with old old age, which is that period of assisted living and dementia immediately preceding death. He is in favor of suicide and assisted suicide because he has determined that that sort of life is not worth living, and that life is only worth life if it is lived well.

So I have a difference of opinion with the author in a couple things. One is growing old gracefully—instead of his approach, I’ll probably be on the side of those who continue starting new things and whatnot (although I’ll probably skip the plastic surgery in pursuit of a youthful appearance). I’m also against the thought that life is worthless unless it’s lived well, since that principle leads one onto a slippery slope where the well can be adjusted to different levels according to one’s desired outcome, and the option to end one’s own life can easily become society’s prerogative to end the lives of those who are not living well but might not know it. Perhaps my resistance comes from a sneaking suspicion that I’ve not lived my life well and my hope I’ll do better now. Or perhaps it’s a principle that life is better than not-life.

At any rate, it was a fun and engaging read. Perhaps I’ll look for the author’s other works at book sales since I didn’t see others next to this one at the library.