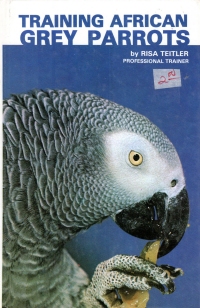 You’re probably wondering why I picked up this book. Well, that’s easy: It was on my to-read shelves. No, no, you say; why did you buy this book, Brian J.? You’ve got a house full of cats! Well, gentle reader, twenty-some years ago, when I was a young man who planned to be a novelist, I thought it would be cool to have a main character who has a pet African grey parrot (kind of like Baretta; I don’t know why I am so fixated on Robert Blake allusions lately). I was so interested in it at that time that the girl I was seeing even bought a monk parakeet, which is a low-end mimic of a bird. But that’s been decades, so today I cannot even think of the character or the conceit of a plot I was planning.

So the book talks about how to pick out a good young parrot, how to work patiently with it to teach it how to come out of its cage, step on a stick and then your finger, how to maximize training it phrases and best use its mimicry, and to teach the bird tricks like climbing a ladder and ringing a bell. The book also goes into some trainer-esque things like trimming the bird’s claws and beak and clipping its feathers; I can’t imagine trying to do these things as a beginner, but I suppose it’s good to have them in there for completeness.

So am I tempted to get such a bird? Well, some of the things that turned me aside from getting one of my own back in those days are still true. They’re fairly expensive. They will, in all probability, outlive me (easier now than then, but these birds have a life span of 50 years or so, and I didn’t think so then and know so now). I could probably afford one, expensive as it is, and I do spend more time at home than I did in my middle 20s, but I also have cats who would agitate at the least and eat at the worst the expensive bird, so it’s probably still not for me.

But if I remember the plot and character of the book, I know more about training the birds, so I can deduct the couple hours I spent reading from my taxes someday.

Somewhere around here, I have a book on having rabbits as pets, too; although I have yet to read that book, you might remember a character in John Donnelly’s Gold has a pet rabbit.