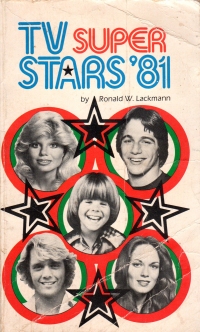 “Verily, verily,” you say, “This is about the lowest one can go to reach 100 books in the year.” Well, gentle reader, I’d like to point out that Advanced French for Exceptional Cats has even less substance than this Weekly Reader book. Besides, I’ve already read TV Superstars ’82 and TV Superstars ’83. So I’m not just running up the score here. The score, by the way, is 100 books read this year with this title.

At any rate, as with the other (later) books, it features brief biographical sketches of stars from contemporary (then) television shows grouped by the show. So you get the stars of The Dukes of Hazzard together, the stars of WKRP in Cincinnati grouped together, and so on.

The book reuses (or the later books will reuse) bios from those whose programs are on the air, so I’d already read Tom Wopat and John Schneider’s bits from the ’82 edition (’83 has the scab Dukes). The differences in the books’ contents, though, illustrate the fleeting nature of “superstardom” as the shows come and go. For example, Eight Is Enough, Buck Rogers in the 25th Century, and B.J. and the Bear on television until 1981, so the actors in it are superstars in 1981, but mostly forgotten by 1983 (according to the book).

This book has, unlike the others, animal star bios: The dog who played Boomer (a dog named Johnny) and the Bear (a chimp named Sam). I don’t remember seeing those in the later books, but animal sidekicks seem to have passed out of fashion in the 80s.

The main bit of trivia I got from the book was reminding me of House Calls, a medical show with Gregory Harrison and Lynn Redgrave. It kind of got lost in the blur of the medical shows of the era, from Trapper John, M.D. to St. Elsewhere (which did not air concurrently, but they did in the era known as “my childhood”). So I’m ready if it comes up in trivia nights or on Jeopardy!, but it probably won’t since the window of viable trivia only extends back thirty years, apparently.

It is also a quick reminder, reading these books, how something that seemed to always be when you’re young might only reflect a couple of years. But a high percentage of your life in your youth, so it seems more permanent than it is.