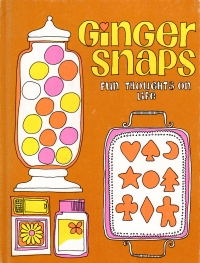 This book is a middle 1970s collection of what we used to call proverbs, but by the mid to late 20th century had to be accompanied with some wry wit. Many of them are the sorts of things you’d find on Internet memes today, if Internet memes lasted longer than it takes to scroll past them on the social media sites. No, these proverbs of the pre-computer era would be photocopied with some cartoon and pinned to a cubicle wall or taped to a the breakroom cinderblocks.

Which is not to say they’re untrue or without their wisdom. As a matter of fact, this book includes lessons from Lao Tzu:

Character is what you are in the dark.

Given the time from whence it came, its proverbs promote hard work, character, skepticism of government, and trust in God. Which means modern people won’t be well versed in any, which might make the contents more unapproachable and archaic than they should be.