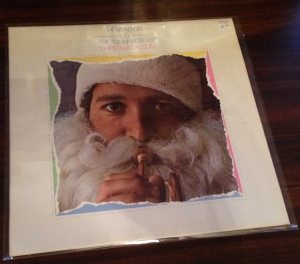 This album fits in with the mellow 1960s sound found on the other Christmas albums I’ve reviewed so far this year (you can find them here). As you might know, gentle reader, it was Herb Alpert and the Tijuana Brass that initially led me into collecting albums from the 1960s in the easy listening genre, and when I saw this album at an antique mall, I bought it. You can tell I’m serious because I paid $5.00 for it. You can really tell I’m serious about it because I paid $5 for the LP when I’d already received the CD as a Christmas gift. Or perhaps you know that I like to spin records at Christmas.

At any rate, the album features mostly secular winter-time songs associated with Christmas, but has “The Christmas Song” and a bit of a religous Bach piece called “Jesu, Joy of Man’s Desiring”.

You don’t tend to see “Las Mañanitas” on a Christmas record as it’s a traditional Mexican birthday song, but it could fit the Christ birth theme. “The Bell That Couldn’t Jingle” is a particularly nice bit with Herb Alpert on the vocals. Did you know Herb Alpert is the only artist to win a Grammy for an instrumental and a vocal performance? True fact. Not this song, though, although his gentle tones offer a mellow bit of encouragement.

I like this album plenty and play it a bunch, both on the turntable and on the CD when I’m not in my parlor. Let that be a ringing endorsement.