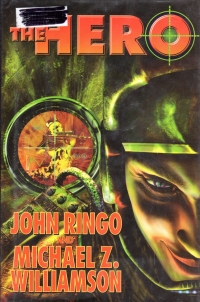 I bought this book a year ago in Florida. As I was browsing my bookshelves, I told myself I was in the mood for some military sci-fi. I’ve tried some before: I picked up something by Robert Frezza, but I put it down not long into it; I tried some of David Drake’s Hammer’s Slammers stories, but also put them aside. It looks as though military science fiction is not going to be my genre of choice.

This particular volume did not dispel me of that notion.

Wait a minute, didn’t I just get published in an anthology of military science fiction? Well, yes, which explains why I became interested in reading some of it. Because I’ve got a plot in mind that would take the conceit of my poem and turn it into a novel. So I wanted to do some research into the genre to see what it’s like and whatnot. Which is why I read this book.

This book, as the link below indicates, is volume 6 in a series. So immediately I’m dropped into a world with a whole back story to it. Whereas I’ve complained previously about series business taking over books in a series, it’s not so much the case in this book. However, there is a whole world/universe/mythos that has evolved and been explained in hundreds of pages prior where that information gets stuffed into a book as exposition. As it appears here. Perhaps it would be better to have been more lightly alluded to since much of the exposition doesn’t directly relate to the plot.

The plot: A deep reconnaissance team is sent to a distant planet to investigate what might be an enemy base. New to the team is an alien from a race that has manipulated mankind in the past, and the other team members don’t trust him. However, they’ll need his extra sensory perception abilities to succeed. When they get there, after their snoop-n-poop (as Richard Marcinko would put it), they find an ancient alien artifact worth slightly less than a Powerball ticket. At which point, the team’s sniper kills most of the rest of the team to steal the artifact, but the alien takes it before he can. And suddenly it’s a cat-and-mouse game as they try to reach the extraction point without getting shot by each other.

That’s the plot. That’s what the book flap says when I read it wondering what the point of the book was.

Because the plot doesn’t really start until about page 130 of about 300. Beforehand, we get a mission briefing, a training exercise, a night on the town to left off some steam and get laid, a ride to the planet, and a long walk to the alien base. The book is rich in detail. How much detail? It spends four pages talking about how the team crosses a river. Then most of them die and the chase is on.

Even then, much of the exciting chase is spent shifting between the characters viewpoints as each expresses internally how he cannot trust the others and how he’ll kill them. They traverse terrain, engage each other a bit, and then one wins. Sort of. Then there’s a wrap up epilogue.

So I’m not sanguine that I’ll enjoy the subgenre as a whole; it seems to be written by post-military people by post-military people with a military precision at least as far as the detail goes. I’ve got a couple more Ringo books; I’ll give them a try at some point, but I’m not eager to base my forthcoming (forevethcoming is the new term for “Forever Forthcoming”) on the subgenre. It’ll be more a science fiction novel with a militaryish setting.

Of course, I’m basing my blatherings here on a novel, part of a novel, and a couple short stories’ worth of study of the subgenre. I’m open to suggestion and revising my opinion if I like the other Ringo books. Or because tomorrow is sunnier.