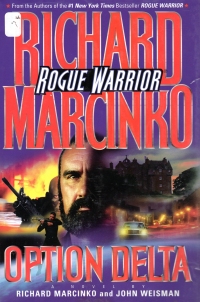 It’s been not quite a year since I reviewed Rogue Warrior: Designation Gold, and if I hadn’t re-read the report on it, I would have repeated much of the same for this book. The first person narrator is brash and vulgar, and it works okay in some spots but does seem a little much at times. The technical and tactical briefings are broken into the narrative with a certain flair that beats Clancy. And the book has aged too well; written after the “end of history,” the narrator does not think much of the then-current Clinton administration and the military draw-down it performed.

In the book, Marcinko finds that someone has been digging up and selling small pocket tactical nukes that the US cached in West Germany for use by special forces in the event of a Soviet invasion. He’s supposed to find remaining caches, but he also decides to find who’s behind it. It’s an ultra-nationalist right-wing German bent on making Germany great again, of course, but Hitler’s frozen head does not make an appearance.

The book was written in 1999, so check out this lament:

The answer lies in the real quntessence of intelligence gathering: the concept that information is the raw material out of which political power can be produced. And because political power is something that budget-intensive organizations (which obviously include all the intelligence agencies) do not want to relinquish, forgo, or sacrifice, most of ’em treat their material as wholly proprietary.

Indeed, they’re like only children who won’t share their toys in kindergarten. The unhappy result is that most intel is stovepiped. It’s kinda like all those smokestacks you used to see in the old industrial zones before the tree-huggers outlawed smokestacks. Each existed parallel to the others. Each ventred its own hot air (Now that’s an apt image, since this is intel we’re talking about here, huh).

In a couple of years, we’d hear about that, wouldn’t we? Which makes me wonder: What is Jamie Gorelick doing now? It’s been a while since something she’s touched has gone to hell, hasn’t it?

Gentle reader, welcome to the real world, where DGAS is a way of life.

Whether it’s the White House memos, State Department cables, or the Pentagon’s most secret mission profiles, materials tend to be stored on computers sans safeguards. People don’t like to have to remember passwords. Indeed, they often write the passwords down and leave ’em in their desks. Or to make things easy for themselves (not to mention folks like me), they simply disable all the built-in security devices and make their computers user (and thief) friendly.

The nice thing about the EC is that once they check your passport, you can cross borders at will.

At any rate, it’s a pretty good read. Of course, it represents the closest thing to 21st century thrillers that I read. Perhaps I should try more. Also, note that Marcinko is still alive and is about 74 now. I’ll be sad when he passes. Although his (and by “his” I mean he and his co-author’s works) aren’t bad reads. You could do worse. I often do.