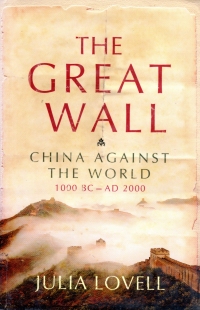 I read this book as part of my recent Sinophilia kick.

This book is a bit of history and a bit of cultural psychoanalysis. Instead of a straightforward history, the book focuses on the story of wall-building in China, from the earliest walls in the Qin Dynasty through the creation of the Ming wall near Beijing called The Great Wall and beyond to the Great Firewall in the 21st century. As such, a lot of non-wall building dynasties and history is left out along with major trends in Chinese thought (Confucism vs Daoism and the import of Buddhism). The book chops around a bit, too, jumping from the early history to stories of explorers and Indiana Jones types finding remnants of the wall in the desert.

Still, it highlights some patterns and cycles in Chinese history, from where barbarian tribes overthrow a Chinese dynasty, remain vital for a while, and then become Chinese only to lose their military moxie and build walls in their decline. Whereupon another vital tribe takes over, remains vital for a while, and so on. The narrative sweep of the book isn’t compelling enough to pull you along unlike other books more biographical or focused on ascents of civilizations, and the author could have tightened in places a bit.

The author takes a couple of light shots at George W. Bush (president of the United States when the book was written) and at Israel (for building a fence of its own, the fools! The Mongols always get in!), but overall it’s not a political book nor a particularly noticeably leftist history book. It isn’t pro- or anti-China. It gets a few shots in at Jesuits, though.

So I’m glad to have read it.